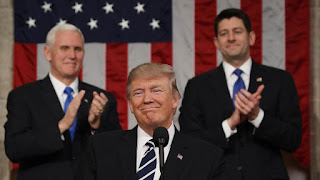 Trump's vapid speech to the Joint Session of Congress last night revealed, among other things, that he is an educational know-nothing. As you might expect, the speech was void of any real vision for the future of public education or school reform. It amounted to little more than a sound-bite ad for market-driven schooling.

But as he read from the teleprompter, a few lines caught my attention.

First, was the often repeated cliche used by former Sec. of Ed Arne Duncan, that education is "the civil rights issue of our time." It was hollow enough when Duncan first claimed it while often, in the same breath, stating his opposition to "forced integration".

But if Duncan's civil rights phrase mongering was tragedy, hearing it again from Trump, an open racist and rabid opponent of civil rights, was farce. Especially, coming as it did, a day after he and Ed Sec. Betsy DeVos held up Historic Black Colleges and Universities as their model of "choice" without once mentioning HBCUs' history as a response to Jim Crow and racial segregation policies which prevented black and other minority students from attending many white-only universities.

In other words, a throw-back to Plessy v. Ferguson kind of choice.

DT presented an image of children growing up in "a nation of miracles", as in, it will take a miracle for many of them to grow up. But as we have learned, there are no miracles in successful schooling. Just the hard work of teachers, parents and communities in a supportive and well-funded system of public education.

Trump's call for "members of both parties to pass an education bill that funds school choice for disadvantaged youth, including millions of African-American and Latino children" was a waste of time and words.

A bill, which allows states to shift millions of federal dollars from public schools into privately-run charters, was already passed a little more than a year ago in the form of ESSA. On top of that, Trump has proposed another $20B for charters.  That coupled with huge federal grants already flowing to state for vouchers, charters and "choice" programs, eliminates the need for any further legislation. So one would think.


...families should be free to choose the public, private, charter, magnet, religious or home school that is right for them.

Are students really going to be able to choose a home school that's right for them? The inanity of the statement didn't escape Stephen Colbert who said he would pick Trump's home for his kids. "It seems very nice."

Finally, there was this great, telling, non-sequitur:


Every American child should be able to... attend a great school and to have access to a high-paying job.

Yes children. If you want a great school, support law and order.
Posted by Mike Klonsky at 8:45 AM