Setting the table for fascism, American-style 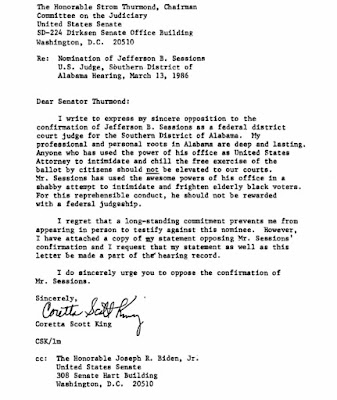 After Dr. King was assassinated in Memphis, nearly a half-century ago, there was an attempt by the dominant culture to turn him into a harmless icon. That often happens to revolutionaries when they die. But if you ever doubted the power of King's ideas, yesterday's Senate hearings on the appointment of racist Alabama Sen. Jeff Sessions as AG should put those doubts to rest.

When Sen. Elizabeth Warren attempted to enter an appropriate, brief, and relatively mild letter from King's widow Coretta Scott King, criticizing Sessions' record on civil rights, Warren was immediately silenced by her trembling Republican colleagues,who charged that she was "impugning his integrity."

The silencing of critics, media, judges and legislators, combined with a propaganda blitz based on big lies and "alt-facts" have become central features of the Trump regime. Every day we're fed more and more until the cynicism runs so deep that the lies all becomes normalized and the war drums become ambient noise.

But make no mistake. There's a method to this madness. The lies aren't just pathological, they're political as well. The latest example was Trump's big lie yesterday, at a confab of county sheriffs. He claimed, without any evidence, that the U.S. murder rate is now the "highest in 47 years." In fact, the murder rate, while horrific, is at its lowest point in decades. It remains as high as it is, not for want of more cops and federal agents, but for the flood of cheap guns, which Trump encourages.

Why make such a provocative and easily debunked fib? The answer lies in Trump's follow-up statement, “If you ran Chicago, you would solve that nightmare.”

If that isn't an open call for a police state, I don't know what is.

Remember, Trump's selling this BS to whip up the same group of sheriffs who were mobilized to put down the water protectors protests at Standing Rock. I should point out here that several sheriffs and deputies refused to take part in the violent suppression of those protests. Look for more of the same by police professionals in the months ahead.

Despite its populist window dressing, this is a regime that can't rule based on popular will. Its base is too narrow and there are too many internal divisions. Trump unexpectedly won the election while losing the popular vote by 3 million, because of a perfect storm. But the global threat of Trumpism is existential and would be there even if Trump had lost and didn't have the extra burden of running the government.

Running the country and trampling the bureaucracy, the other branches of government (including the courts and even the military leadership and intelligence organizations), will require not only a policization/militarization of society, but an ideological assault on the truth (alt-facts) as well.

To put it more bluntly, The Trumpians are setting the table for the global, direct neo-fascist takeover they've only just begun. I say "neo-fascist" only because its features may not look the same as the Hitler/German brand from the 1930s.


Contrast: While a hero of white supremacists has the president's ear, the words of the widow of MLK are silenced on senate floor. https://t.co/9IjcncPKz5
— Kevin B. Blackistone (@ProfBlackistone) February 8, 2017