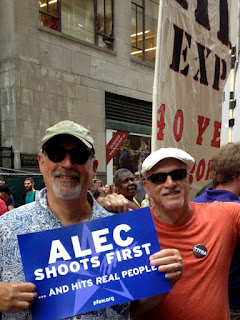 This morning at 11, my brother Fred and I kick off our new radio show, Hitting Left on WLPN, 105.5 FM. In Chicago or not, we'll be streaming galaxy-wide at LumpenRadio.Com. Or, you can download the app and hear the show with a click on your phone.

We're not taking phone calls today, but you can Tweet us at #HittingLeft and we'll try to get to your questions and comments.

This morning, Fred and I will be talking Trump, ed/politics and much more, with our in-studio guest, Troy LaRaviere. If you follow this blog, you know Troy well. He's the president of the Chicago Principals and Administrators Assoc. and was the principal at Blaine Elementary before the mayor took revenge on him and had him fired for "insubordination", meaning, Troy's open criticisms of Rahm's policies were having an impact. His hard-hitting Tribune commentary ("Why does Rahm Emanuel put business ahead of our children?") really pissed off the mayor. Plus, Troy being a Bernie Sanders campaigner may also have had something to do with it, according to the IG.

But, as they say, the tables are turning. Troy landed on his feet and won the PAAA election. Now there's even talk about him running for mayor. Of course, we're going to ask him about that and a lot more.