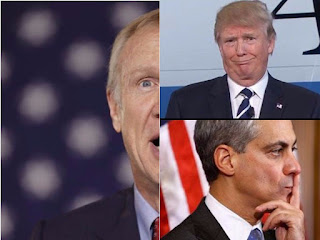 The real question now is whether or not CPS can withstand the latest three-pronged assault it faces from Operation TRAUMPMA That's the acronym I put together for Trump, Rauner and Rahm who are each playing their role in the trauma and erosion of public education and ultimately all public space and decision-making in this city.

Pres. Trump and the Republicans, representing the center prong of the trident, have made the cities their target. Trumponomics, the shift of billions of federal dollars into military spending and away from education, social services and infrastructure repair projects will have a devastating effect on city schools and neighborhoods.

His appointment of Betsy DeVos as education secretary represents nothing less than a declaration of war against urban education. Like her Democratic predecessor at the DOE, DeVos seems bent on using the very federal authority and resources she decries to push school re-segregation, privatization and aggressive implementation of so-called "choice" policies of vouchers and privately-run charters.

Gov. Rauner continues to hold the state budget hostage as a way of forcing austerity, unconstitutional pension "reform" (theft) and an end to collective bargaining for teachers and all public workers.

Earlier this month, five families sued the state on behalf of CPS, claiming that the state has violated the civil rights of their children by giving Chicago schools less funding than other districts. But suits like this usually end up languishing in the courts, sometimes for years, offering little int he way of relief for struggling families.

WHITENIZING CHICAGO...
Mayor Emanuel and his appointed schools CEO Forrest Claypool have put up only token resistance to the Republican assault, protecting their wealthy patrons from tax increases, spending lavishly on downtown and gentrifying neighborhood projects that benefit the 1%, while implementing draconian and racially discriminatory cuts on the city's resource-starved schools and neighborhoods.

The mayor is up to his old tricks again, taking away a lot and then giving a little back when faced with community resistance. After a revolt from 16 members of his Latino advisory committee, Rahm agreed to restore $15M of $46M budget freeze he ordered earlier this month. But the move was purely a piece of cosmetic surgery, an effort to blunt criticism that cuts disproportionately affected schools with mostly poor, minority students and English language learners.

CPS's $5.41 billion budget still has a $111 million hole to fill before the fiscal year ends on June 30.
Now Rahm is threatening to close schools three weeks early, a move that would only further decrease school revenue, while putting nearly a half-million young people at risk, out on dangerous city streets all day with jobs and no place to go. What could possibly go wrong?

How ironic coming from a mayor who ran for office on the promise of a longer school day and year, once elected, forcing the plan on resistant schools and teachers, without any accompanying additional funding.

While Rahm and the CTU agreed to a new contract, narrowly avoiding a teachers strike in November, Rahm and Claypool continue to impose cuts and furloughs on city teachers. How will the CTU and other city unions respond? This is one of the questions we will be posing to CTU Pres. Karen Lewis who will be our in-studio guest Friday at 11 a.m. (CST) on Klonsky Bros. Hitting Left on WLPN 105.5 F.M..

The best way to listen live is to download the Lumpen Radio app here.