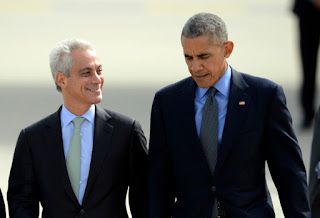 After spending much of the past year in the Democrats' dog house, it appears Rahm is being rehabilitated. Now that Clinton feels that IL in the bag, it's becoming safe for party regulars, including POTUS himself, to be seen and even have their pictures taken with the mayor.

On Tuesday, Emanuel felt confident enough to announce that he intends to run for a third term in 2019. He's taking credit for putting city finances back on "solid ground" after crying just weeks ago, that the city was broke. He also wants props for averting a teachers strike.

The latest batch of Wikileaks posts confirm what many of us already knew and have been reporting for some time. They show Clinton campaign chair John Podesta being urged last March, before two Democratic debates and the Illinois primary, to have Clinton “separate big time” from a politically toxic Rahm, in the wake of the Chicago police shooting scandal and school closings.

At the time, Rahm's numbers in the city's black community were tumbling into single digits. They're not much better than that now. But it's pretty clear that Chicago's black voters are going to turn out for Hillary. After all, she's not Trump.

Emanuel’s woes in Chicago were also part of the fight between Clinton and Bernie Sanders, who came within a whisker of out-polling the mayor in the IL primary. The warning came in a March 5, 2016 email to Podesta from Neera Tanden, a Clinton money bundler, who runs Podesta's Center for American Progress and who had been battling with black civil rights leaders to keep black voters in the fold.


“I got into it w Ben jealous last night and he was all obsessed w how Hillary hasn’t condemned Rahm,” Tanden said of the former NAACP leader who backed Bernie Sanders in the primary. “I’m sure you guys are all over this for the debate but just thought I’d send in that they may well go there for the debate. My rec is to separate big time.”

Some other leaks go back to 2008 when Obama was considering Rahm for his Chief of Staff. Cecilia Muñoz, currently director of the White House Domestic Policy Council, panicked at the idea. She wrote Podesta:


So I hate to bug you with anything else knowing how much must be going on, but the Rahm Emanuel as Chief of Staff rumor is circulating like wildfire...folks know how explosive that would be in my part of the world, no? The FIRST thing we'll get asked is why he picked someone who has been consistently hostile to immigrants, and we'll have to respond.

Obama did go on to appoint Emanuel just days after Muñoz' missive and Rahm used the COS position to block any and all immigration reform initiatives, just as she had feared. Rahm called immigration, the "third rail" of American politics.

With Rahm working to re-invent himself as a progressive and mending fences with the teachers union, it may now be safe for him to come out from under the bus and for Dems to be seen with him.
Posted by Mike Klonsky at 2:16 PM