Looking back on the Chicago anti-Trump protest 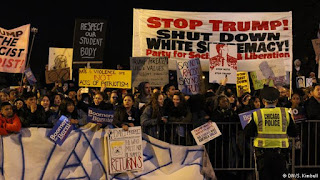 "I was wondering what happened with my rally in Chicago and other rallies where we had such violence. She’s the one, and Obama, that caused the violence. They hired people, they paid them $1,500, and they’re on tape saying, be violent, cause fights, do bad things." -- DT

I was out of town on March 11, when thousands of protesters surrounded the UIC pavilion and sent Donald Trump packing. My loss. Turns out, at least according to the Trump campaign, I would have collected $1,500 from Hillary's people if I would only have taken part. Of course I would have had to engage in some fisticuffs to collect my money. It could have marked the beginning of a glorious prize fighting career, even at age 72.

Then again, my brother Fred and sister-in-law Anne took part and neither of them collected any dough -- at least that's what they told me.

I said at the time, that we would one day look back on the Chicago protest as the beginning of the end for his campaign. Now that the Republicans seem headed for a landslide defeat, up and down the ticket, the Chicago protest is being looked at once again as an early source of Trump's slide into the political abyss.

The mainly-peaceful (there were only 4 arrests) but militant protest not only forced Trump to cancel his planned, hate-filled anti-immigrant rally in the heart of Chicago, it also set the stage for the wave of youth activism and protest across the country, making it near impossible for the racist demagogue to campaign in cities with large black and Latino populations.

Some 43,000 undergraduate and graduate students had signed a petition asking UIC to cancel the rally by March 6. Up until March, Trump rallies had been marked by violent attacks on peaceful protesters, attacks encouraged from the podium by Trump himself, and aimed at intimidation. But surrounded by a huge young, multi-racial crowd, the bully was forced to retreat. His tough-guy mask ripped off.

The protest also helped the Sanders campaign activate enough support among young activists to nearly carry Illinois. If Hillary's campaign was indeed behind the protest (which they weren't) it was a colossal mistake on their part. At the time, Trump blamed Sanders for the clashes in Chicago, insisting that the protesters were "Bernie's crowd."  Actually the anti-Trump response was organized at the last moment by  University of Illinois Chicago students, MoveOn.org as wee asBernie Sanders supporters, to their credit.
Posted by Mike Klonsky at 10:41 AM