SEIU does the right thing. Gives Boardman the boot from Local #73

Readers may remember back in 2014 when I tangled with Local #73 Pres. Christine Boardman. At the time I was reacting to Boardman's sellout of CPS janitors and custodians by agreeing to Rahm's $340 million sub-contracting deal with Aramark and SodexoMagic ("magic" my ass). It was one of the largest privatization moves of any school district in the nation, leaving custodians out of work, schools filthy, and principals in revolt.

Boardman then put icing on her sell-out with a $25,000 contribution to Rahm's campaign war chest. Local #73 also tried to put the kibosh on other locals' support for Rahm's opponent, Chuy Garcia.

"Ugh!", I wrote. "She's dirtier than a CPS bathroom" for "signing on" to the deal. I had searched in vain, including on the Local 73 website, for any sign of protest or public resistance.

Boardman flipped out, tried to bully me and even threatened to take me to court over my hyperbolic blog post. Her lawyer's letter to me argued that she never actually "signed off" on the deal and that in fact, she was not "dirtier than a CPS bathroom".

After consulting with my own attorneys at Pro, Bono & Plead, and having made my point, I retracted both statements. I had no hard evidence that Boardman had literally signed an acutal piece of paper on the Aramark/Sodexo deal or that she was indeed, dirtier than a CPS bathroom (a pretty high bar for dirtiness, I admit).

My brother Fred tooned it. 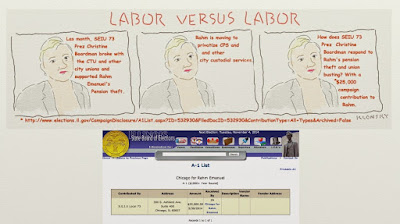 Now, nearly two years later -- too late perhaps for the local's 14,000 city employees or for students wallowing in filthy schools -- the chickens have come home to roost at Local #73. SEIU trustees have stepped in and put the local in receivership. Boardman, the bully, has been given the boot.

According to the union's statement on the takeover:


This time, it stems from “incessant fighting” between union president Christine Boardman and secretary-treasurer Matt Brandon that apparently “reached a boiling point and seriously disrupted the operations and functioning of the Local, putting members’ interests at risk.”

Boardman and Brandon “each challenge the basic legitimacy of the other’s authority to hold office or lead the Local,” resulting in a “debilitating dysfunction of the Local’s governance process as well as causing instability and confusion within the Local and its membership,”

Now the local has a chance to regroup, get organized and become a voice for the workers who need them the most.

Please don't sue me for saying this Christine, but good riddance to bad garbage.
Posted by Mike Klonsky at 1:58 PM