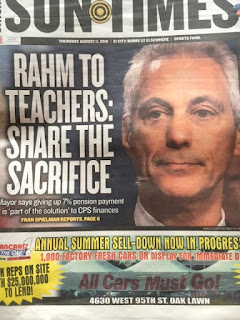 Rahm to big Chicago banksters -- Don't worry, you'll be first in line to get paid.

And by part of the solution, Rahm means teachers should accept a 7% pay cut to cover pension costs and bear the burden of years of the city and state missing required contributions to the pension fund.


Mayor Rahm Emanuel on Wednesday joined his Chicago Public Schools chief in calling on teachers to start contributing a chunk of their salaries toward their pensions."

Who at City Hall thought telling teachers to give up a chunk of salary, was a good idea? Are they trying to provoke a strike? Or is this the kind of bullying needed to appease Gov. Rauner in exchange for a budget deal?

CTU Pres. Karen Lewis dismissed schools chief Forrest Claypool's pledge of a budget with "no gimmicks," saying, "Was his mouth moving when he said it?"

Dark day for homeless students. I remember Patricia Scott from my days coaching at Prosser.

This from Mark Brown's column in today's S-T.


At the end of this past school year, Prosser counted 68 homeless students among its 1,400 enrollees, 26 of whom were seniors. “They all graduated,” Scott told me Wednesday. “I’m very proud of that.”

That group of 26 seniors will be the last class of homeless students Scott shepherds to their high school degree at Prosser.

On Friday, she was among 1,000 Chicago Public Schools employees to learn they were getting laid off.

Just multiply Ms. Scott's story by 1,000 and you begin to feel the impact the layoffs had on students and their families.
Posted by Mike Klonsky at 12:38 PM