No, don't leave minimum wage, testing, or school deseg to the states

Just got a robocall from CTU organizer Brandon Johnson reminding me to call my state senator (Iris Martinez) and push for passage of HB557, the elected school board bill. So I did. Thanks Brandon. 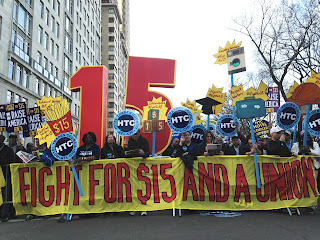 
On NBC’s “Meet the Press” Sunday, Trump told Chuck Todd, “I don’t know how people make it on $7.25.” Soon after, on ABC’s “This Week,” the Republican added, “I haven’t decided in terms of numbers, but I think people have to get more.”

TODD: Right. You want the fed– but should the federal government set a floor, and then you let the states–

TRUMP: No, I’d rather have the states go out and do what they have to do. And the states compete with each other, not only other countries, but they compete with each other, Chuck. So I like the idea of let the states decide. But I think people should get more. I think they’re out there. They’re working. It is a very low number. You know, with what’s happened to the economy, with what’s happened to the cost. I mean, it’s just– I don’t know how you live on $7.25 an hour. But I would say let the states decide.

I haven't heard so much states-rights pandering since the Supreme Court ruled on Brown vs. Board of Ed in '54,  when the big scare in Dixie was that the federal gov't was going to force school desegregation at gun-point upon the states. That sure as hell didn't happen. Did it?

Ironically, it was Pres. Obama's right-hand man in education, Arne Duncan, who undercut the Justice Dept's own move against Louisiana's use of vouchers and charter schools to promote re-segregation. Duncan's argument against "forced integration" echoed those of AR Gov. Orville Faubus and AL police chief "Bull" Conner in the '50s.

Trump says, let the states compete over minimum wage with corporate-tool govs like Bobby Jindal in LA, Bruce Rauner in IL, Scott Walker in WI, or John Kasich in OH leading the charge. Great plan, Trumpf. Isn't that what we have now? MW will be down to a dollar a day.

As a direct result of the Fight For 15 Movement, several cities have already passed $15/hr. minimum-wage ordinances on their own. And guess what? The Golden Gate Bridge hasn't fallen into the bay. In fact, biz is booming wherever the MW is the highest. Companies are not fleeing San Francisco, Pittsburgh, L.A., or N.Y.  A federal minimum-wage floor would ensure that they can't.

But Trump isn't the only one raising up the new states-rights banner. After all, isn't that the gist of the new national education law that even the teacher unions are raving about?

ESSA supposedly ends the years of testing madness imposed by the DOE (good) and greatly limits the federal government’s control of education policy that began in 1965 when the original Elementary and Secondary Education Act (ESEA) passed as part of President Lyndon Johnson’s War on Poverty.

I guess the war is over. Poverty won.

But there's no indication that leaving testing (or poverty) in the hands of the states will eliminate or reduce testing madness or improve learning outcomes.

Arguments for or against federal power mean little without content. Yes, keep big gov't (state and federal) hands off our cell phones, churches and out of our bed rooms. Cut the Pentagon war machine, yes.

But on things like environmental protection, federal lands and national parks, enforcement of civil rights law, gun control, and protection of our drinking water (Flint, MI) -- hands on.

As for unrestricted states power over education, take a look at what's going on in IL.

Chicago Public Schools are now 10 months without a budget. Gov. Rauner continues to hold the budget hostage, hoping for a pro-business, "grand bargain" with Boss Madigan that includes draconian cuts to social services and the neutering of the state's teacher unions. State colleges universities like Chicago State, are on the brink of collapse and corrupt charter school networks like UNO are laughing all the way to the bank.

Where are you feds?