The flip side of testing madness. 'You will test only 2% of the time'

Duncan and Casserly making the media rounds... Last night on the PBS News Hour, no matter what Gwen Ifill asked about the administration's supposed shift on testing. Duncan responded with his stock answers. Michael Casserly, Director-For-Life, it seems, of the Council of Great City Schools, came off like the ultimate bureaucrat. He sounds reluctant, but willing to go along with the charade. "It's complicated" he says. Let's have lots more departmental and cross-state discussions and meetings. He's been 40 years atop the organization that could be funded to facilitate just such meetings and conferences.

Was it just me or did they both sound like they were defending rather than reassessing current testing policies? It seemed like they're already warning us against the impending perils of "too little testing."

Duncan actually claimed that he had been on this track all along and that the new line on testing was an affirmation of his own long-standing views.


Well, I think we have embraced this idea for a while. What’s different now is we actually have data. And I have been talking about this, as you know, for a while, and the president has. But what we had were lots of anecdotes. And we knew we needed to get to a better spot, but no one had ever surveyed the nation.

Funny, the words Race To The Top were never mentioned. Have they been erased from official memory?

Ifill gets right to the point:

GWEN IFILL: In the meantime, there has been a huge, I would say, explosion of a business model which is based on testing. Don’t you anticipate pushback from those companies who have been behind a lot of these tests?

MICHAEL CASSERLY: oh, I think the answer to that is, yes, of course we do. We’re not naive about this and we certainly don’t think that just because we put out some data about how much testing it is that all of a sudden the test publishers are going to go, oh, gee, heavens, I never knew, we should stop selling these tests.

It took me so long to find out (Day Tripper)... With elections coming up and with tens of thousands of angry opt-out parents refusing to have their kids take the test, Obama and Duncan have finally concluded that we're "too obsessed with testing" and that schools and teachers are spending way too much time on it. My goodness, it's taken them nearly 7 years to figure this out. That, even with all those Duncan listening tours?

I guess the tours didn't include listening to those angry parents who Duncan referred to as "white suburban moms" with not-so-brilliant kids. After all, their tales of the effects of the administration's testing madness on their own children was merely "anecdotal" -- not real "data".

Maybe Duncan suddenly remembered that they also vote and in large numbers. That's not anecdotal. It's data.

It's just the flip side of DOE testing mandates. Only now it's how many minutes to spend.

The implication here is that it's our own fault. It's OUR obsession -- all of us. Remember the President's scolding of teachers last year, for "teaching to the test"? Now comes Duncan's faux self-criticism that, "we have ALL [my emphasis] supported policies that have contributed to the problem..."

But when the state of Washington moved to de-emphasize testing, Duncan yanked their NCLB waiver, leaving the state's schools open to the DOE's failed system of test-based rewards and punishments under Race To The Top.

When districts like ours in Chicago tried to simply limit or delay the PARCC exam this year, we were threatened with a similar beat-down and forced to test even when the district admitted they weren't prepared to administer them properly. 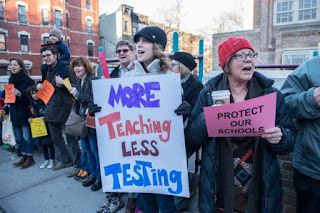 Obama now says he will ask schools to limit testing to only 2% of class time. I can't wait to hear how they're going to monitor that, especially with Common Core now driving instruction.

And how in the world did they come up with the 2% number. I mean, why not 1%? Or 4%? Do they mean to tell us that 2% is the optimal number of minutes to spend on testing? Did Duncan suck this number out of his...thumb? Please show me the non-anecdotal "data" behind this new metric.

Neither Duncan nor Casserly spoke to the high stakes behind the testing madness. They still call it "holding teachers accountable." No mention either, of the influence of corporate-style reformers, power philanthropies and the giant testing and technology companies who contribute heavily to political campaigns and sit atop several of Obama's advisory boards.

Reducing the number of tests or even improving the "quality" of the tests won't lessen the stakes on teacher evaluation or college entrance based on student test results.
Posted by Mike Klonsky at 8:41 AM