Spinning his own legacy while feathering his own nest. Get ready for another Duncan 'miracle'. 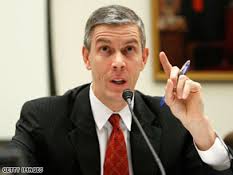 Just as Arne Duncan was announcing his retirement and his plans to return to Chicago to "spend more time with his family," he dropped another $8M in fed dollars on pal Mike Milkie's Noble charter school chain. This on top of another $42.2M coming to IL with the lion's share going to Noble and Lawndale Educational and Regional Network.

Milkie says Noble (which I lovingly call the Billionaires; Charter Network) needs the money in order to open 8 new schools to meet the growing demand and shorten its "waitlist." But the Raise Your Hand parents group just made a few phone calls and found out that at least 5 Noble schools can't fill the seats they have. They wonder, "Where's the waitlist?"


Why is the charter community rallying for more schools when there are plenty of openings in existing charter schools across Chicago, including Noble, and CPS’ enrollment has been declining for years, down roughly 14,000 students just since 2012? RYH found last year that there are over 12,000 open seats in charters across Chicago. How and why are taxpayers expected to fund eight new schools when there are plenty of open seats in Noble schools right now?

The only answer I can come up with is that AD is feathering his own nest. Let's see where he lands upon his return to ChiTown.

Aside from preparing a soft landing, he's also taking care of his legacy. No, there won't be a Duncan Library on Chicago park district land. Maybe a Noble charter named for him, which seems to be the key to Milkie's fund-raising success. Think Rauner, Rowe/Clark, Pritzker, Muchin...

No, he and his successor John King are already juking the stats (with plenty of help from the good folks at Edweek) in order to paint a glowing picture of Duncan's 7 years in Obama's DOE.


High school graduation rates, which most recently stood at 81 percent nationally, appear to be on track to rise for the third year in a row. The department won't know for sure that graduation rates ticked up again until early next year.

All this assumes, of course, that we have some agreement on what graduation rates and dropout rates actually mean. Remember George Bush's Texas Miracle? We were told that dropout rates in TX were down to zero.

Here in Chicago we find, for example, that when a student leaves a charter school after the 9th grade and later graduates from neighborhood public school, the charter is credited with having graduated that student.


Twenty-eight states saw the gap between black and white students close between those years, and a whopping 32 states saw it close between white and Hispanic students. "It looks like the nation will take another step in the right direction," Duncan said at a roundtable for reporters Monday.

Wait a minute, Arne. Even if you believe those figures (which I don't), they mean that in 18 states, the gap is widening or staying the same. As for "whopping" (C'mon Alyson & Andrew. Try a little journalistic restraint), did grad rates "tick up" (your words) or whop? From my own look at the numbers, I'd say slight-tick up. And the gap between white students and students of color is still vast.

As your own colleagues point out:

Yes, grad rates appear to be on the rise, but as Arizona State Prof. Sherman Dorn puts it:


"Whether or not it's actually more persistent increases, we'll have to wait a couple years [to see]."

Because of constant changes in the way the rates have been computed, it's difficult to assess how much progress has been made over years past or how much, if any, credit for the rise belongs to Duncan. That's worth asking since most of the data was collected for school years 2010-11 and could be a result of changes made in pre-Duncan years or have little or nothing to do with DOE policies.

It's also worth asking because AD has a track record for this kind of legacy spinning. Remember when he left Chicago for D.C.? He was self-credited for the so-called Chicago Miracle which was his Renaissance 2010 "reform" consisting of school closings and charter openings.

It wasn't until a year later that Duncan's own patrons at the Civic Committee were calling school reform under Duncan "an abysmal failure." Too late. The horse had left the barn and AD was safely in D.C.
Posted by Mike Klonsky at 1:58 PM