After all the wasted test-prep hours and Common Core testing madness...

"We've been writing and meeting with ISBE officials for over two years to stop this madness. We've told them that our technology isn't ready, our Common Core curriculum isn't ready and the test will be hurting kids," said Argo Community High School District 217 Superintendent Kevin O'Mara, who also is president of the Illinois High School District Organization.


The results from last spring's PARRC exams are dismal by anyone's standards. 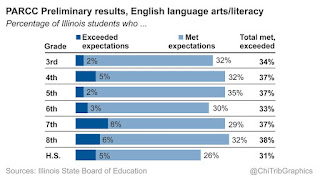 I'm still waiting to see how this breaks out in Chicago and by race and special ed.

Millions of dollars spent on Common Core and PARRC testing (you're welcome Pearson). Thousands of classroom hours diverted away from teaching/learning and into testing and test prep. School districts threatened with loss of funding if parents opted-out. Teachers evaluated, paid, promoted and fired, using skewed value-added formulas based on students' test scores. And most importantly, nearly all of Illinois' 2 million students set up for failure.

The fallout could be disastrous. Early test failure usually leads to more kids dropping out. Chicago's school population is already down 100,000 students from a year ago.

This is what decades of corporate-style "reform" and years of No Child Left Behind and Race To The Top has left us with. Thank you Margaret Spellings and Arne Duncan.

This isn't about failing schools or bad teachers. It's about a failed system with failed leadership. It's also about rising conditions of concentrated child and family poverty and the under-funding of schools.

Rauner's new state schools chief, Tony Smith, thinks this is all great. "A new baseline" he says, with the admonition that the scores should not be used to "shame or punish". Where has he been these past two decades? That's all they've been used for.

Parents who opted-out were spot on. Subjecting children to hours of standardized testing when everyone knew the game was rigged, served no educative purpose. It's too bad there weren't more. Maybe next time there will be enough to stop the gears from turning.