New school supplies from the Pentagon. Deasy in L.A. grabs some M16s and grenade launchers. 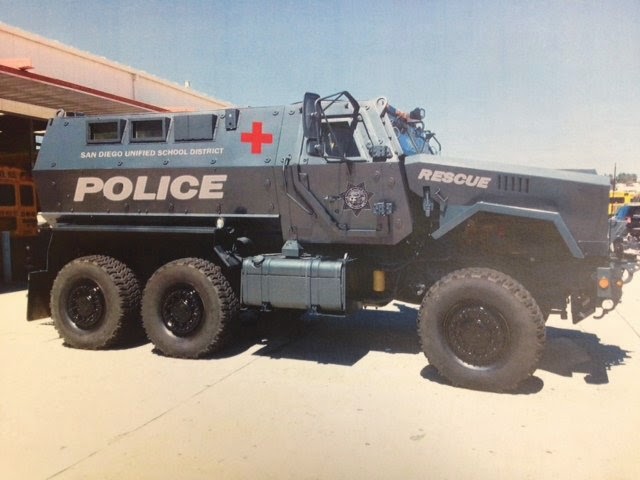 All San Diego schools got from the Pentagon was this one lousy armored vehicle.

But the Wall St. Journal reports that LAUSD did much better. Supt. John Deasy has stocked up 61 M16 assault rifles, three grenade launchers, and a mine-resistant vehicle from the Pentagon.


But the district is getting rid of the grenade launchers, which it never intended to use to launch grenades or use in a school setting, said Steven Zipperman, chief of the Los Angeles Schools Police Department. The launchers, received in 2001, might have helped other police in the county disperse crowds by shooting rubber munitions, he said.

As for the massive MRAP armored vehicle. Mr. Zipperman said his department thought it could be useful for evacuations and to save lives in a "sustained incident." Maybe like an ISIS attack or a sharp decline in test scores.

In Texas, near the Mexican border, the sprawling Edinburg Consolidated Independent School District has 34,700 students and operates its own SWAT team, thanks in part to military gear it received in recent years from a federal program. The gear included two Humvees and a cargo truck, as well as power generators, said district Police Chief Ricardo Perez. The district applied for weapons, too, but wasn't given any, so instead purchased its own M4 and AR-15 assault-style rifles, he said.

The weapons are given to schools through the 1033 Program, created by Congress in the early 1990s to allow law-enforcement agencies to obtain excess Defense Department supplies, paying only for shipping. The program has transferred $5.1 billion in items, including $4.5 million worth in 2013.

At the Granite School Dist. in Salt Lake County, Utah, spokesman Ben Horsley said the security department carefully thought out its request for a handful of M16 rifles. "It would be irresponsible to send our officers into an active shooter situation with just a handgun," he said.

ARMING TEACHERS?...Speaking of Granite School Dist., a Taylorsville, UT elementary school teacher somehow shot herself in the leg last week while in a school restroom.


"Student safety is our primary concern and we are grateful that the injuries sustained by this teacher are not life threatening and that no students or other faculty were injured," the district said in a written statement.

Granite School District policy requires concealed weapon holders to have their guns on their person and "in their control" at all times.
Posted by Mike Klonsky at 1:19 PM