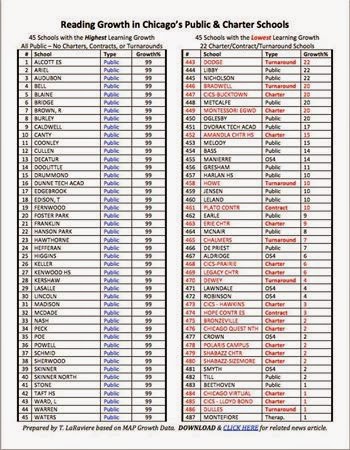 This after more than a decade of test-based reform strategies under Daley/Duncan and now under Emanuel/Byrd-Bennett, leading to the closing of dozens of traditional public schools and the uncapped expansion of charters, contracts and turnarounds.

Given this data, how can Rahm and BBB possibly take credit for the slight overall bump in test scores reported last week? They can't, writes LaRaviere in this op-ed Sun-Times piece.


When mayor Rahm Emanuel recently heralded a small gain on the average Chicago Public Schools elementary “MAP” test results, I knew something wasn’t quite right. It wasn’t what he said; it was what he didn’t say. You see, this is the first year the MAP scores can provide a more decisive apples-to-apples comparison of charter schools and traditional public schools.

Good Read in WaPo by Naomi Shihab Nye, a chancellor of the Academy of American Poets. Growing up in both Ferguson, MO and Gaza has given her some insights few others share. I will definitely find a way to use this in my course this quarter. Thinking #FergusonSyllabus.


Ferguson was a leafy green historic suburb with a gracious red brick elementary school called Central. I loved that school, attending kindergarten through sixth grade there. All my classmates were white, of various derivations – Italians, French-Canadians, etc. My father was the only Arab in Ferguson. But he ran for the school board and won.


Speaking of Charters...Feds from various agencies are bumping into each other investigating UNO's charter hustlers. This time around it's the IRS, according to the Sun-Times. Their audit involves nearly $37 million in bonds issued in 2011 for the UNO Charter School Network Inc., whose 16 campuses across the city receive a total of about $50 million a year in funding from the Chicago Public Schools.

In a letter to the Illinois Finance Authority, IRS officials said the 2011 bonds were "selected for examination because of information received from external sources or developed internally that caused a concern that the debt issuance may fail one or more provisions" of the federal Internal Revenue Code.

In June, UNO and its charter-school network settled a civil case filed by the federal Securities and Exchange Commission that accused them of defrauding investors who bought the bonds.


UNO began in the 1980s as a Hispanic community activist group. Under Rangel, it moved into the lucrative charter-school business in 1998, expanding quickly with support from political figures including Illinois House Speaker Michael Madigan (D-Chicago), former Mayor Richard M. Daley and Emanuel.