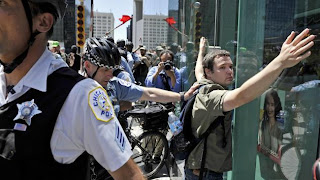 The mayor has created a war zone in Chicago. By bringing the NATO war makers into town, bringing in federal troops and police from across the country to patrol the city's downtown and neighborhoods, Rahm Emanuel has lit a fuse that will inevitably explode. Protesters are already being jailed and clashes between protesters and Bridgeport (Daley's old neighborhood and power base) residents. I think that's what he wants so he can offer Chicago up as a model for handling the expected forthcoming wave of civil unrest in response to the nation's deepening economic crisis.  More on this ind the days ahead.

The first year of Rahm's so-called school reform has been a disaster, not only for the city's 420,000 students, not only for city teachers, parents, and communities, but politically for the always-campaigning mayor himself. 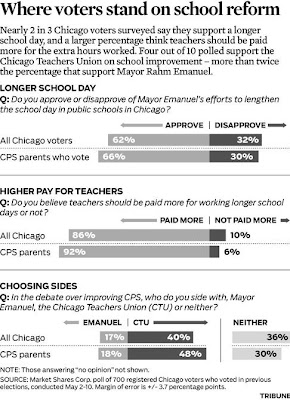 Just look at the latest Chicago Tribune poll numbers. While most people support having a longer school day, the overwhelming majority of city voters, especially parents, support the Chicago Teachers Union over the mayor and want teachers to be compensated for their extra work.

Overall, on matters of school reform, the poll numbers represent an embarrassing defeat for the mayor. Despite the full-court PR press by his overpopulated and overworked media-spin department at CPS, his numbers are coming down faster than an alderman's drawers. Here they are:


Do you believe teachers should be paid more for for working longer school days or not?

Even with the threat of a teachers strike looming, Chicagoans backed more pay for teachers 86% to 10%. The numbers were even higher when it came to parent support -- 92% to 6%. These numbers should definitely help strengthen the CTU bargaining position.


In the debate over improving CPS, who do you side with, Mayor Emanuel, the Chicago Teachers Union (CTU), or neither?

The results here are even more amazing. Among all Chicago voters, union support more than doubles support for the mayor, 40% to 17% with 36% uncommitted. Among voting parents, Rahm garners only 18% compared to 48% for the CTU, and 30% uncommitted.

While things are looking bleaker than ever for Rahm (and for mayoral control of the schools) it's another big pay-day for Paul Vallas who was Mayor Daley's first appointed schools CEO. Greg Hinz at Crain's reports that Vallas, who is supposed to be the Interim Schools Supt. in Bridgeport (Connecticut -- not Daley's old hood), is being awarded with a nearly $1 million contract for his consulting firm, the Vallas Group. The contract calls for Vallas Group to work on "coordination of interventions in low-performing school districts."

As i have reported on several occasions, Vallas and his high powered and high price consulting team has already made inroads into the state. In Rockford, for example, they got Vallas' assistant named as superintendent and then Vallas' group was brought in to grease the path for privately-run charter schools.