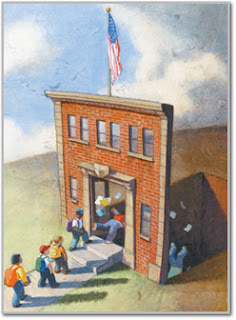 For more than a decade, billions in federal and state dollars were targeted to whittle classes so that teachers can devote more time and attention to each student, crafting lessons to fit the needs of struggling students, high-achievers and everyone in between. Nationwide, the average number of students in elementary classes dropped from 29 in 1961 to 24 in 1996, according to the National Education Association. In 2004, the average elementary class nationwide had 20 children, the U.S. Education Department says, with about 25 in the average secondary class.

But this smaller-is-better trend is in jeopardy. A survey of more than 800 districts released last month by the American Association of School Administrators found that 36 percent have moved to larger classes in response to the economic downturn. Many are also putting off maintenance, buying fewer textbooks and lowering thermostats.

…McCain took a skinny dip into the deep end of the hypocrisy pool when he spoke of a fictional "close relationship" between Obama and former 1960s bomber William Ayers. And McCain did so while overlooking his own chummy outings with G. Gordon Liddy, a felon who attempted to undermine the fair election of the president in 1972 when he and others bugged the offices of the Democratic National Committee. McCain has remained conveniently oblivious to Liddy's plot to bomb the Brookings Institution and his sociopathic plan to kill columnist Jack Anderson. The nutty Liddy more than once has instructed his listeners on the proper methods to "off" federal agents. Oddly, Sen. McCain praises Liddy as a fellow who upholds American values.

A trio of writers at the Contra Costa Times offers up some prominent west coast folks who would make good picks for the Obama team. I like most of them, especially LDH, Van Jones and Jeff Bleich (I worked with him on youth violence issues during Clinton years).