Rahm, the master of clichés 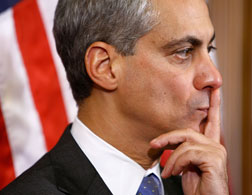 “So I’ve asked everybody to explore all available options and think creatively out of the box. One of the things I won’t do is kick the can down the road.” -- Mayor Rahm Emanuel

Another thing the mayor won't do is shift the tax burden onto his wealthy campaign patrons.

It seems that Rahm will try every gimmick he can think of to make up for the city and state's history of pension theft. Everything, that is, except for that which is most necessary and the only way out of the crisis -- raise revenue by making the wealthiest pay their fair share of taxes.

The latest from his bag of tricks involves selling more than $10 billion in pension obligation bonds, supposedly to head off another massive property tax increase on voters, right before election time. But sooner or later that debt will come due and have to be paid on the back end of the deal by -- guess who? Not to mention, what happens if the market tanks, which it's bound to do. It reminds me of his predecessor, Mayor Daley's selling off the city's parking meters in exchange for a quick cash infusion. We may never recover from that one.

It's a stupid plan as Rahm's campaign rivals are quick to point out. But fast-talking Rahm has his usual responses. He is after all, the master of the cliché. Check it out. He wants us to "think outside the box" and not "kick the can down the road".