DeVos and Duncan both bought into gun culture 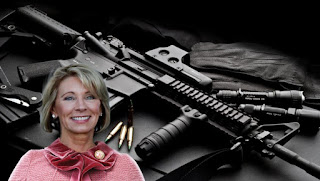 Sec. of Education Betsy DeVos and her predecessor Arne Duncan, each wanted to buy guns with federal education funds meant for schools. The difference being, DeVos prefered teachers packing guns in their classroom. Duncan spent lots of ed dollars on expensive military hardware for his own DOE team.

A firestorm erupted when news got out this week that DeVos was considering letting school districts use federal Title 1 money to y guns, putting the issue back at the center of the debate over school safety.

This was mainly in response to the Parkland school shootings. But it also raised fundamental questions about the nature of public schools. Parkland students have been calling for tighter gun control while DeVos and Republican politicians, many on the NRA take, argued that a proliferation of guns in schools would discourage shooters and make schools safer. There's not a lick of evidence to support that theory.

Since he left his post as Pres. Obama's education chief, Duncan has been an advocate of gun control, to the point where, for a few days, he was urging parents to keep their children home from public schools until gun laws were passed. As you might expect, he pleas fell on deaf ears.

For one thing, Duncan's standing with parents has been lower than dirt since he attacked those "white, suburban" opt-out parents. For another, Democrats had a chance to push for gun control during the Obama/Duncan era when they controlled both houses. They didn't and Duncan was silent on the issue back then. Now, with Republicans controlling the legislature and White House, the chances of passing even the minimum gun safety laws are slim-to-none, making a long-term school boycott a ridiculous tactic. Finally, Duncan sends his own kids to private school and therefore has no skin in the boycott game he's playing.

Back in 2010, Duncan himself was a free spender when it came to buying military hardware for his department's own squad of student-loan chasers. He spent thousands on deadly new assault weapons, including these 27 shotguns:

The were meant to replace 27 that were "worn out". I'm still waiting to hear how exactly they were worn out.

A year later, armed with their new hardware, Arne's troops went out hunting for student-loan late-payers. They mistakenly thought they found one out in Stockton, CA where Arne's army kicked in the door in the early morning hours to collect on the overdue loans and dragged Kenneth Wright out of his home, terrifying his small children. It was actually his estranged wife they were looking for.

Wright's neighbors, who did not want to disclose their last names, said they saw the raid unfold.


"They surrounded the house; it was like a task force or S.W.A.T team," across the street neighbor Becky said. "They all had guns. They dragged him out in his boxer shorts, threw him to the ground and handcuffed him."

According to Becky and her two children, the raid started at 6 a.m. with agents ramming down Wright's front door.

"I watched until I went to work at 10:45 and they were still out there," Becky said.

Her young daughter, Valerie, said she counted 13 agents and one Stockton police officer outside Wright's home.

"I felt really bad for those kids," said Becky about agents when they brought out Wright's three children. "They were crying really loud."

Let's put an end to this gun madness. Keep schools and the DOE gun-free.
Posted by Mike Klonsky at 10:01 PM