The thing about autocrats... 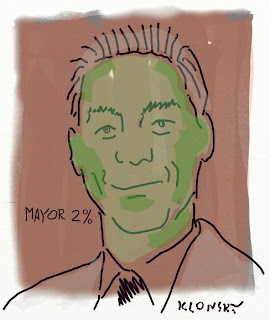 "The time for negotiations is over." -- Rahm Emanuel

A few minutes later, in front of City Hall, janitors, lunch ladies, teachers,  parents, clergy and union officials interlocked arms and sat down in neat rows in the northbound lanes of LaSalle Street. "Save our schools," they chanted. -- WBEZ

The one thing autocrats and political bosses world-wide have in common -- they don't give a rat's ass about what the 99% think. Their power comes from a tiny reactionary base of support from corporate billionaires  and they have no tolerance for popular dissent, either from inside or outside their own narrow political machines.

Mubarak, who responded to the Egyptian people's demands for democratic reform with violence and terror, was ousted after 18 days of demonstrations that sparked the 2011 Arab Spring. Now he sits behind bars, most likely until he dies.

When I think of Cheney, I recall his curt  response in the Spring of 2008, to polls showing growing opposition to the Iraq invasion. When asked about polls showing that  two-thirds of Americans opposed the war, Cheney replied, "So?"


"You don't care what the American people think?" ABC News' Martha Raddatz asked the vice president. "You can't be blown off course by polls," said Cheney.

Eight months later, Cheney, Bush and the neocons were swept out of office by a mass movement including millions of young voters, energized largely by their opposition to the war and pinning their hopes on Barack Obama.

On a day when thousands of angry parents, teachers, students, unionists and clergy turned out in Chicago to protest the announced closings of neighborhood schools, Rahm took the Mubarak/Cheney road.

At a hastily called press conference, the mayor, whose poll ratings of those strongly approving his policies are now at 2%, declared that "the time for negotiations is over". He spoke at length about the "new process" he said has already allowed the public to weigh in on the proposed closings. CPS and a school closings commission held public hearings over more than four months on the issue, and said more than 20,000 people participated, said Rahm. The district now will hold three meetings for each school on the final closing list before the school board votes.

But a group of a dozen African-American ministers who came to the Mayor's Office with a letter urging him to  put a moratorium on closings asked about the point of additional hearings if Emanuel has already made up his mind.


“If nobody is going to be heard at the hearings, what’s the use of having the hearings?” said Pastor Marshall Hatch of the New Mount Pilgrim Church in West Garfield Park. “If it’s a done deal, then stop wasting everybody’s time.”

Rahm believes that a huge campaign war chest and his links with Obama will be enough to keep him in power after 2014. But growing anger in the black community over these targeted school closings could change all that. Yesterday's mass protest, including civil disobedience arrests of some 150 people, has raised the stakes. The mayor can now talk all he wants about no negotiations but he faces a potential Chicago Spring if he does. Not to mention the dozens of Civil Rights law suits and possible injunctions he and his lieutenant Byrd-Bennett face as they move ahead on school closings.

An NBC News poll (scroll to bottom of the page to vote) yesterday on the heels of the protest, asked: "Whom do you support in the school closing battle, Rahm Emanuel or Karen Lewis?" So far, with some 80,000 people voting, it's Rahm 23% -- Karen 77%.