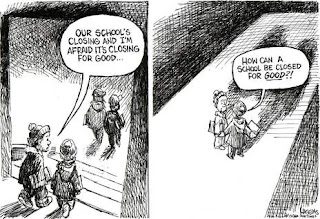 
The head of the Chicago Public Schools got the blessing this week to close as many as 70 schools by June, the nod coming from an independent panel she convened to help her decide how many under-used schools CPS could responsibly shutter.  -- "Close schools over two years, not one"

Well first, how can a panel be "independent" if it is hand-picked by the schools CEO? And why call it "independent" when the so-called the Commission of School Utilization was clearly set up as  a rump group to do an end run around the legislature's own legally established Chicago Educational Facilities Task Force (CEFTF) and to avoid state law mandating the district to present a clear rationale and get community input before closing any more schools?

Secondly, is it "independent" if the purpose of the rump commission is simply to help the CEO decide "how many" schools to close, rather than evaluating if those schools were in-fact underutilized and if closing is better than improving them? What we've learned from groups like Raise Your Hand, is that the board grossly exaggerated the decline in CPS enrollment.

While BBB surely did get community input, the process was clearly just for show. The community voice was loud, clear and unified. But it's equally clear now that neither Byrd-Bennett nor commission head Frank Clark were listening. They are moving ahead with mass school closings despite the community's demand for a one-year moratorium.

Now the legislature should once again step in to do the job its own legislation intended it to do. If Rahm and BBB move ahead and close 70 schools in the next 90 days, negatively impacting the lives of the city's African-American children, watch for a slew of civil rights lawsuits and more mass protests from parents and community residents.
Posted by Mike Klonsky at 10:03 AM