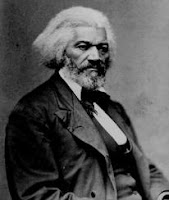 Find out just what any people will quietly submit to and you have the exact measure of the injustice and wrong which will be imposed on them. -- Frederick Douglass


Barbara Byrd-Bennett will make her declaration of war on Chicago's most vulnerable communities today, when she announces officially that she will close 50 schools over the next few months, the largest number ever closed in one place at one time in the country, This first round of closings will move about 15,000 students to consolidated "welcoming" schools, dramatically increasing class sizes, heightening safety risks, and causing major problems for families with special-needs kids. This, despite research showing that the closings will save little money and despite the more than 20,000 parents, teachers, students and community members who turned out at 34 recent community hearings to plead their case. BBB never attended one of those hearings, only to declare cynically after supposedly "pouring over the transcripts", that "'Everybody got it that we really needed to close schools..."

What BBB and her newly-appointed ex-Marine covert opps chief Tom Tyrell were really studying was the selective breadth and depth of community resistance. Her not-so-secret school closing plan, designed under the guidance of the Mayor and the Civic Committee, has always been to close or consolidate 200 schools and replace many with privately-managed charters. But tactically, she will hone in on the 50 most isolated, under-resourced black and Latino neighborhoods where she suspects the lowest levels of organization and resistance from aldermen. 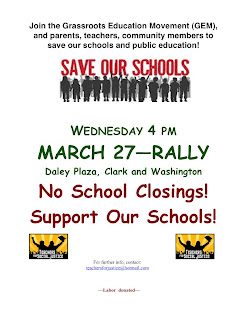 The real test will be whether communities can unite citywide and move beyond standing up for only their local neighborhood school, to form a powerful, unified resistance movement. A good indicator will be the size and militancy of the March 27th, 4 p.m. rally at Daley Plaza, being called by the teachers union and a host of student, parent and community groups.

While BBB is announcing her war plans,CReATE, a group of about 100 Chicago-area professors and researchers, has scheduled its own press conference to announce the publication of its latest Research Brief on School Closures. The brief should provide ample ammunition to those making the case against mass school closures. It offers solid evidence that closures of this type are racially discriminatory and generally harmful academically to the thousands of victimized students.

Don't miss Greg Michie's compelling tale of Salvador's Last Day to get a close-up picture of the effects of school disruption and mobility on the lives of children. Greg's piece in Huffington offers better evidence than any quantitative study for why these mass school closings and shuffling of kids from one school to another, needs to be stopped.
Posted by Mike Klonsky at 6:16 AM