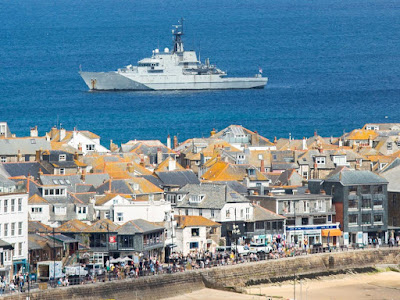 Answer: G7
Today the G7 summit begins in the tiny village of St. Ives in this corner of Cornwall – a holiday idyll fast resembling a military Green Zone – rumours are rife. Residents question environmental destruction, disruption and sheer astronomical cost of the summit - which will see world leaders ensconced in luxury hotels minutes from some of UK’s most deprived areas... This is a tourist resort that increasingly feels like an occupied enclave.

While Biden et al will be put up at the luxury Tregenna Castle (sea views, sub-tropical gardens, on-site golf course), the billets here do not appear to even come with their own toilets. Its communal loos all round. Ironically, perhaps, given this is thought to be a police or security base, only a few fields away is the site where thousands of Extinction Rebellion protestors will be camping. -- The Independent

Pres. Biden's G7 game plan calls for a Cold War united-front against China with the U.S. and U.K. at its center. Biden is relying on support for the plan coming from Boris Johnson. But its doubtful that other G7 members will play along and internal conflicts are bound to arise.

Johnson so far, seems quite willing to play along with the so-far evidence-free "lab-leak" story as part of the anti-China narrative. Chinese foreign ministry spokesperson Wang Wenbin says the "vigorous hyping up" of the lab leak theory on the part of American politicians reminds him of the early 2000s when Americans were "hyping up the assertion that Iraq possessed weapons of mass destruction." -- Newsweek

Sounds about right to me. 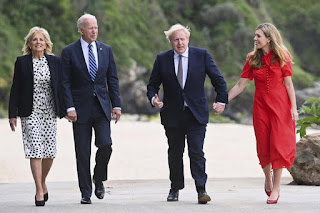 Remember, it was Biden who previously referred to Johnson as, "a physical and emotional clone'" of Trump. In case you don't know where all this is heading in terms of politics here in the U.S., Biden blamed Johnson's Conservative Party winning a parliamentary majority on its rival Labour Party "moving too far left."
The current G7 meeting appears to represent a break from Trump's "America First" isolationism. But Biden's anti-China posturing and his call for sanctions and more barriers to Chinese trade echo Trump's trade war policies. It's a call for an unholy alliance that will be hard for the U.S. to sustain given that the European Union and China are two of the biggest traders in the world. China is now the EU's second-biggest trading partner behind the United States and the EU is China's biggest trading partner.

If there's a positive coming from the G7, it could be Biden's announcement that the U.S. and European countries are prepared to donate a billion doses to the poorest countries, hardest hit by the pandemic. But their motives are obvious.

AP reports that the well-funded global alliance has faced a slow start to its vaccination campaign, as richer nations have locked up billions of doses through contracts directly with drug manufacturers. As a result, the U.S. and wealthy European countries are now racing to catch up with China’s moves to establish itself as a leader in the fight against the coronavirus.

Last summer, China’s top leader, Xi Jinping, heralded the promise of a Chinese-made Covid-19 vaccine as a global public good. So far, he appears to be making good on that pledge.

Maybe some benefits may yet come out of U.S.-China competition provided that the U.S. cold war push is somehow constrained.
Posted by Mike Klonsky at 7:50 AM