Biden's anti-China pitch not going well at the G-7 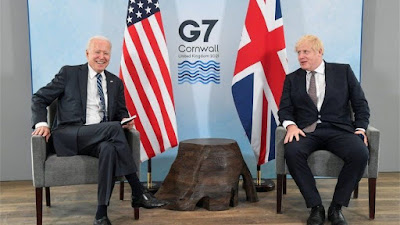 As Biden preaches collective security and prosperity to the Group of Seven rich democracies, the European Union and NATO, he has to reckon that “the key threat is inside, it’s us. It’s not Russia, it’s not China, it’s not extremism, it’s not Afghanistan, it’s us.” --  Charles Kupchan, Obama security advisor on European Affairs.

Biden's call for a united front against China isn't going over well with everyone at the G-7 meeting, according to a report in today's WaPo.

A senior U.S. official who spoke with reporters following a morning session largely devoted to China described like-mindedness about concerns over Chinese behavior but a difference of opinion about how to respond. He listed Britain, Canada and France as having quickly backed Biden’s view, but it was not immediately clear where the others stood.

The problem for Biden is that China remains Europe's second-largest trading partner, behind only the U.S. itself. Plus, Biden, despite his claim that "America is back," still has a tough road ahead when it comes to re-establishing the U.S. as a reliable partner.

Biden's biggest problem is that despite his post-Trump popularity and high approval ratings, he's been unable to deliver on his own policy initiatives back home despite Democrat's control of the House and Senate.

Angela Merkel, who is skeptical of Biden's hard anti-China stance, doesn't want to risk Germany's export of millions of cars to China annually.

Even Japan, which has had a tense relationship with China going back to WWII, is still a close neighbor and trading partner and has also been wary.

And Italy signed a 2019 memorandum of understanding with China to join its “Belt and Road Initiative,” the sprawling infrastructure development project that the G-7 is now attempting to compete with.

Biden's charge against China's Belt and Road -- that it "leaves poorer nations saddled with debt" -- could make cynics out of the most pollyannish Europeans. After all, hasn't it been the IMF and the World Bank that have become infamous for destabilizing national economies and forcing austerity on much of the world, including Europe?

China's unbelievably rapid rise as an alternative to the IMF is winning them favor in much of the poorest countries in Asia and Africa. Plus China has done it without warring against other countries or imposing regime change on them. While the U.S. and wealthy European countries have just announced their willingness to distribute the Covid vaccine to the neediest countries, China has been far out on this.

Several of the G-7 countries are already deeply invested along with China in fighting global climate change. China was the first country to adopt a carbon-neutral pledge for 2060.

Britain and Italy are co-chairs of a major international climate conference later this year and seek China’s help to meet targets.

Biden could gain back some lost U.S. respectability at the G-7, especially since he's following in Trump's wake. But he will likely have to retreat on much of his hardline anti-China framework for the meeting.