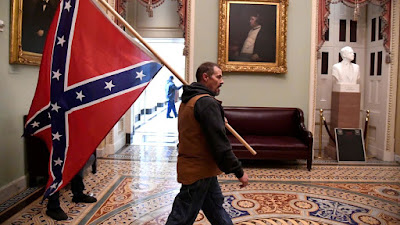 Of course, the neo-confederate GOP leadership is opposed to another probe of their 1/6 attempted coup d'etat. To them, the coup wasn't a crime but rather a great success that will enable them to seize back the power they lost in the election in much the same way as their forebearers did it in 1861. D.T. is their Jefferson Davis. Like Trump, Davis never surrendered his white supremacist lost cause.

The final vote was 54-35, but Republicans withheld the votes necessary to bring the bill up for debate. Just six GOP senators joined with the Democrats today, leaving the measure short of the 60 votes needed to proceed.

More to the point, the confederates not only believe it, but MAGA politicians are actively working to pass new restrictive voting laws in their states, laws they hope will enable them to limit the voting impact of the new Black/Latinx/immigrant majority and consolidate their ideological hold on millions of their followers while paving their way back into the majority in both houses in 2022 and into the White House in 2024.

The neo-confederates are also using their power to impose restrictions on what teachers can or cannot teach about the history of slavery and racial discrimination. The've especially targeted the 1619 Curriculum and its creator, Nikole Hannah-Jones, along with Critical Race Theory as wedge issues to spread fear and whip up a white backlash.

The question is, how will Biden and the Democrats respond? How many concessions will Biden, Schumer and Pelosi make in the name of "bipartisanship"?

Jefferson Davis was imprisoned after the Civil War, a fate that should await D.T. and his fellow neo-confederate leaders.