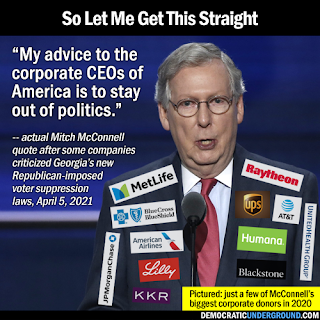 STAY OUT OF POLITICS, INDEED...Why do I think this is funny? Because McConnell takes more money from corporate CEOs than any senator. His re-election effort received a total of $258,880 from 37 chief executives whose companies are components of the S&P 500.

Only one other candidate in the last competitive Senate race received more than $200,000 from S&P CEOs during the 2020 cycle -- as you might have guessed -- Republican Sen. David Perdue of Georgia.