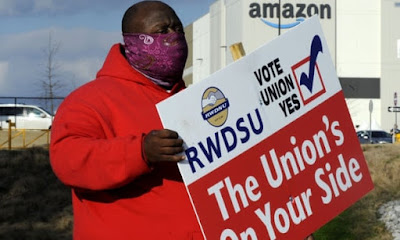 The most dramatic change in American capitalism over the last half-century has been the emergence of corporate behemoths like Amazon and the shrinkage of labor unions. -- Guardian

"For the last year, we’ve had people in positions of incredible power scapegoating Asian Americans. People with the biggest pulpits spreading this kind of hate." -- Washington Post

"Some countries are racing to vaccinate their entire populations while other countries have nothing. This may buy short-term security, but it’s a false sense of security." -- Media briefing