The return of the regime changers. Missiles are flying again in Iraq. 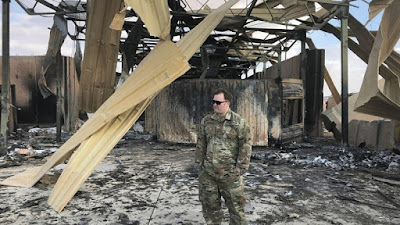 Pres. Biden and his newly-appointed Sec. of State Anthony Blinken seem bent on pushing the U.S. into a disastrous hot war with Iran. Biden has only been in office a couple of months and already missiles are flying again in Iraq and Syria.

Yesterday a missile attack in western Iraq led to the death of a U.S. mercenary.

Pentagon spokesperson John Kirby said the contractor “suffered a cardiac episode while sheltering” and died shortly afterward. He said there were no service members injured and all are accounted for. British and Danish troops also are among those stationed at the base.

The rocket attack was the first since the U.S. struck Iran-aligned militia targets along the Iraq-Syria border last week, killing one militiaman and stoking fears of another cycle of tit-for-tat attacks as happened more than a year ago.  -- AP

Now the Pentagon is surely preparing for another retaliatory move.

It appears to me that this escalation was intentionally meant to sabotage the resumption of U.S. nuclear weapons talks with Iran. Blinken seems to be another regime-changer in the mold of Hillary Clinton.

All this begs the question, why are U.S. troops and mercs still in Iraq after 17 years, over a million deaths, and $4 trillion in taxpayer money wasted. BTW that's triple the money needed for pandemic and economic recovery.

We should also remember that amid the fallout of the U.S. drone strike in Baghdad that killed Iran's General Qassem Soleimani a year ago, the Iraqi parliament voted to oust all U.S. troops stationed in their country. Trump's claim on Iraqi oil aside, it now seems like with the current escalation, Iraqis along with all other countries in the Middle East, already ravaged by the global pandemic, face the prospect of being drawn into all-out war again.

The current escalation dashes the hopes of those who believed that the Democrats' victory would lead to at least a temporary halt to our failed imperialist adventures in the region and to the possibility of bringing our troops home and out of harm's way.

They should have known better.