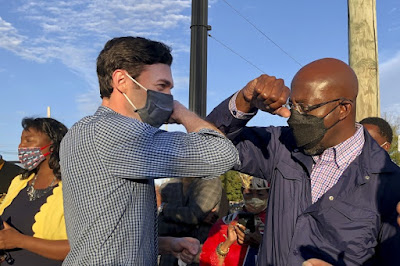 What a great double victory in GA! I stayed up most of the night watching the results come in like any good political junkie would. Now I'm trying to unwind and crank out a blog post before grabbing some badly-needed shut-eye.

Wins for John Ossoff and Raphael Warnock, against tough odds, open up new possibilities for Biden to transcend his "bi-partisan" fantasy and advance a progressive agenda that begins to undo much of the damage from the Trump era. As of this writing, Warnock has been declared the winner while Ossoff's lead of 16,370 votes is now greater than that of Joe Biden's over Donald Trump in Georgia (11,779 votes).

I'm imagining with glee how DT must be beating up on his white supremacist toadies Loeffler and Perdue, over losing to a Jewish liberal and the Black preacher from Dr. King's old Ebenezer Baptist Church in Atlanta.

Thanks and some dough should go out to all the organizers on the ground throughout the state, led of course by Stacey Abrams and her statewide political organization as well as many union brothers and sisters from around the country (including Chicago) and the multi-racial movement of the poor and civil rights groups who have been plowing the Georgian political fields for decades.

That progressive agenda includes real federal pandemic relief (immediately including $2,000 checks), rent, and debt-relief for those working, unemployed and poor families in greatest need and aggressively leading the war against COVID.

It must also include a massive program of relief for public school systems ravaged under Betsy DeVos and her predecessors, as well as support for a national reopening of schools on the scale of the Marshall Plan. This federal initiative needs to be put in place apart from or alongside current hit-or-miss efforts by local school boards, many of which have been marked by confusion and division at a time when trust, clarity, and unity in the community are necessary prereqs.

The key to a safe, full-scale reopening is prioritizing teachers and school staff for vaccination. They should be classified nationally as essential workers with schools used centers for vaccine distribution and community health education.

I'll be talking more about reopening our schools tonight at 10 ET on the Rick Smith Show. Tune in at thericksmithshow.com.