There's no sense in hoping Republicans come to their senses. 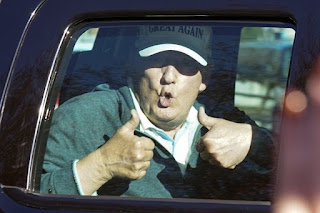 I'm both troubled and amused to hear from so many Democrats still hoping beyond hope that Republicans will come to their senses. Many can't believe or understand why so many MAGAs bought into Trump's right-wing white supremacist populism.

Before the election, the thought was that the larger the voter turnout, even with GOP voter suppression, the greater the Democrats' victory would be. As things turned out, this was only partially true. But record turnouts, driven by an election that was basically a plebiscite on Trump, also helped Republicans in many states.

It was also thought that building the national campaign on a center-right alliance with neocons and "never-Trump" Republicans to the exclusion of the progressive left and "socialists" would cause a major split in the Republican ranks, turning lots of white 2016 Trump voters back into Democrats. There's no evidence that this happened, except on a tiny scale. Biden owes his victory much more to the changing demographics in the suburbs and swing states than to Republican desertions.

Many Dems are still hoping masses of Republicans will change stripes now that Biden has won the election. Sun-Times columnist Neil Steinberg attributes the lack of movement to GOP "cowardice" as if Republican pols like Ted Cruz and Marco Rubio really oppose Trumpism but are afraid to come out and say so.

Let’s talk instead about the Republicans who support Trump as he tries to overturn an American election. How can they shirk from their sworn duty at this moment of national peril? ... Calling out someone for cowardice — I’m looking at you, Ted Cruz — could yet be corrective.

I doubt it. The closeness of the races in many states and a steadfast, even cultlike base have only given Republican pols hope that they can maintain control of the Senate and take back the House in the midterm elections. There's even talk of Trump running again in '24 (if he's not in prison). I doubt that too.
Please take note of Trump cultist Kevin McCarthy's unanimous reelection as House Republican Leader yesterday. Reports are that he received a standing ovation from GOP House members.
No, calling them out for cowardice will not do it. They're just devotees who know how their bread is buttered.
Posted by Mike Klonsky at 2:58 PM

Email ThisBlogThis!Share to TwitterShare to FacebookShare to Pinterest
Labels: Democrats