A coup d'etat? Not likely. Easier for Trump just to cut a deal and move on with his base intact. 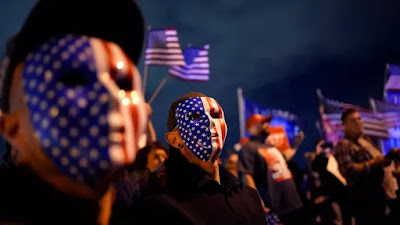 A coup or coup d'état is the removal of an existing government from power, usually through violent means. Typically, it is an illegal, unconstitutional seizure of power by a political faction, the military, or a dictator.

South African Activist Kumi Naidoo: I think our brothers and sisters in America are finding out that it’s much easier for them to change presidents in other countries than to change the president in their own country. -- Democracy Now

The question facing Trump is no longer, can he stay in office after January 20th through ballot-count manipulation? That dog, as they say, just won't hunt. But that doesn't mean his claims to victory will end or that shady attempts to manipulate Electoral College votes or his bogus legal suits won't continue on in the near future.

“He knows it’s over,” one adviser said. But instead of conceding, they said, he is floating one improbable scenario after another for staying in office while he contemplates his uncertain post-presidency future...By dominating the story of his exit from the White House, he hopes to keep his millions of supporters energized and engaged for whatever comes next. -- Maggie Haberman, NYT

But his refusal to concede and his non-commitment to a "peaceful transition" has also provoked speculation about a possible "coup d'etat". Some on the left have even raised the alarm that a coup is either underway or imminent.

But are they really talking about a MAGA armed insurrection? No, I think they mean the kind of coup the Republicans successfully pulled off when Trump was able to tilt the Supreme Court to the right for generations to come.

They are concerned that the MAGAs will make trouble, fail, and make more trouble, enabling Trump and Trumpism to emerge from the current battle in an even stronger position and with a larger and more devoted base than ever in the years to come leading up to the midterm elections. There is even talk about DT running again in '24.

Is it possible that Trump and the Republicans can successfully hold the White House for a second term? Doubtful. Is it possible that a real coup d'etat is at hand? Also doubtful. But should DT's threat be taken seriously? Yes. Why? Two reasons.

One, because he's still in power until January 20th and he can sabotage the transition, damage the COVID recovery program ( For example, he's denying Biden's team access to Dr. Fauci and to internal government data), and mobilize a section of his cult base to provoke violence and disruption in the cities. Just what Biden doesn't need or want.

The Republican Party still belongs to Trump and so does the Senate, unless Democrats can pull of victories in both senate races in Georgia. That means he can continue to block most Democratic policy initiatives and Biden appointments for years, even though he's not the president.

He's also capable of launching a desperate military adventure against Iran in the weeks ahead and suspend civil liberties here at home leaving Biden with a war, not of his own choosing, to manage once in office.

Two, he can use the above threats as leverage in cutting a grand deal with Biden, who is touting himself as president for bipartisanship, national unity, and reconciliation.

But what does Trump need to bargain for?

Numer-one, immunity from prosecution for himself, his WH accomplices, and his entire grifter family, who all have illegally profited from his term in office. A presidential pardon won't do the trick so DT will need top-down pressure from Biden and the Democratic leadership to shut down the ongoing House investigations and put the kibosh on any moves to indict by Manhattan District Attorney Cy Vance and NY's Atty. General Letitia James.

Can Trump pull off such a deal? Would Biden agree to it in the name of reconciliation and "national unity"? It wouldn't surprise me.

We may soon learn the answer to the question “Can a coup be pulled off by people who spell it c-o-o?”