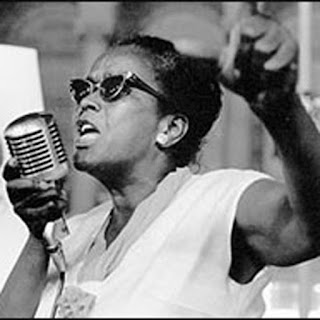 "Ella Baker, a giant of the civil rights movement, left us with this wisdom: Give people light and they will find a way." -- Joe Biden

"You and I cannot be free in America or anywhere else where there is capitalism and imperialism." --  Ella Baker, Puerto Rico Solidarity Rally 1974


Yes, I was captivated as usual by the Obama speeches and deeply moved by Kamala Harris' personal story and will definitely try to beat my brother Fred to the polls this time around to vote the anti-Trump ticket from top to bottom.

Although you might not have gotten this from the convention's singular focus on Biden/Harris, we also need to get out the vote for congressional candidates and take back the Senate if we are to begin undoing the damage Trump's regime has caused. My hunch is, congressional candidates weren't getting much play at the DNC so as not to offend or scare away the anti-Trump Republicans.

It's pretty clear that a united-front strategy -- all hands on deck -- is the right one to take down Trump in November even though it leaves some ("they're all the same") ultra-lefties grumpy and feeling betrayed by their base. But it's also important to remember that even within a united front, struggle goes on. Without that struggle -- and there is room for struggle -- the tone of the Democratic Convention would have been far different and minus progressive voices that made it through Nancy Pelosi's loyalty screen.

It seemed almost pro forma for convention speakers to tip their hat to SNCC '60s freedom fighters at the start of every speech. It shows how much the national BLM protests have forced the party leftward in order to maintain its credibility with labor, immigrants, and younger Black and Latinx voters and how much today's Democratic Party leaders like Harris (admittedly) have to stand on the shoulders of their Black Freedom Movement forerunners.


And these women inspired us to pick up the torch, and fight on. Women like Mary Church Terrell and Mary McCleod Bethune. Fannie Lou Hamer and Diane Nash. Constance Baker Motley and the great Shirley Chisholm. -- Kamala Harris speech

Despite all the civil-rights chatter, it became pretty clear that Pelosi's right-center conception of the anti-Trump united front is far different from ours. Hers is essentially a Kasich/Clinton/Obama coalition that even welcomes with open arms, union-busters, Pentagon and NRA faves, global-warming deniers, right-to-lifers, and neocon Republicans while keeping progressive and left-leaning Democrats at arm's length or out the door completely.

I know, AOC got her minute in the sun (and a powerful minute it was) and Bernie Sanders is too legit to quit. But I'm amazed, though not really surprised to see even loyal progressive Texas Democrats like Julian Castro and Beto O'Rourke, let alone Ilhan Omar and Rashida Tlaib getting short shrift at the DNC. Remember Omar and Tlaib are big-time vote-getters and election winners in crucial swing states MI and MN.

Yet, Pelosi, Biden, and other Dem leaders feel compelled to attack them and other Squad members publicly and are, hopefully unsuccessfully, backing machine pols against them in local primaries. Case in point is Pelosi's recent endorsement of Rep. Joe Kennedy III in a primary challenge against progressive Massachusetts Sen. Ed Markey.

Y'all keep coming for @lsarsour so we will keep showing up for her and let you know that we stand w our sister in solidarity. Hi @lsarsour - we got your back! pic.twitter.com/LhMiFAMPb1
— Harish I. Patel (@iamharishipatel) August 21, 2020