CPS made the right decision but big challenges remain 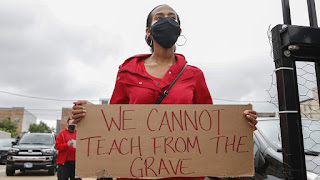 After floating a plan for a mix of in-person and remote learning, the mayor and CPS made the right decision by starting the Chicago school year with remote learning only. It was a decision driven by rising coronavirus numbers along with resistance to an opening from the CTU and many parents. It's also a decision that may save some lives and prevent fewer COVID casualties.

According to Sarah Karp at WBEZ:


The announcement also comes amid rising COVID-19 cases in Chicago. The district said a move to remote learning was dependent on whether the Chicago Department of Public Health determined COVID-19 cases weren’t under control. Though the city hasn’t surpassed those benchmarks, there is growing concern Chicago will reach them before too long.

Now, Chicago parents and teachers will be looking to Chicago Public Schools to put forth a robust remote learning plan.

The initial hybrid plan would have rotated students into buildings two days a week for in-person classes. But CPS officials also said all along that the plan was "preliminary" and that they wouldn’t reopen schools unless it’s safe to do so. That determination has now been made.

But keeping schools closed for the next few months doesn't even begin to deal with either the immediate or long-term educational or health issues created by the pandemic.

There are some immediate measures that CPS, together with the teachers and other stakeholders, can and must take to take to ensure that internet access, along with adequate nutrition and healthcare is available to all of its nearly 400,000 students. The needs of thousands of homeless children have to be met along with those students with special needs, mental health issues, and physical challenges. A daunting, if not impossible challenge with only weeks to plan.

I'm not sure a "robust remote learning plan" can even be considered a real thing under these conditions--without a huge influx of federal dollars and supports which aren't likely under Trump/DeVos.

Then there are some in leadership at CPS who think a robust remote learning plan means returning to the same old sorting, tracking, and testing system that failed so many students in the past, only doing it remotely.

According to WBEZ's Kate Grossman on FB:


Chicago Schools CEO Janice Jackson announced that every teacher would provide live instruction every school day. The district also will return to its regular grading system, with all students receiving letter grades.

I know a better plan can be produced, but it can't be done without a close working relationship between CTU leaders and Mayor Lightfoot. There's lots of divisive, sectarian baggage to be shed if such a relationship is to become a reality. Time is running out. But it can happen.

It seems to be happening in L.A. where L.A. Unified and the teachers union reached a tentative agreement Sunday night on procedures for distance instruction in the fall. Details to come. Now New York remains as the only one among the big 3 cities still moving forward with face-to-face teaching.

I was slightly encouraged to read what seemed like an olive branch being extended by CTU Pres. Jesse Sharkey today. His tone towards the mayor was hostile and divisive as ever yesterday:


“The mayor does not have the guts to close schools,” CTU President Jesse Sharkey said Monday. “They’re putting it on us to close the schools. That’s what we feel like is happening.”

But today, Sharkey was congratulating the mayor for "being willing to listen to the concerns of families, educators, community groups and health professionals."

A good sign if I'm reading it right. We'll see.

Until the pandemic is under control and Trump and the Republicans are out of the White House and Congress, local school districts will be faced with lots of bad choices, like robbing Peter to pay Paul.

On the bright side is the movement in the streets, unprecedented ferment from below which has always been the key force behind progress in this country. Without this ferment, our vision of education and social transformation remains limited to maintaining the status quo or empty reforms.
Posted by Mike Klonsky at 4:12 PM