Teacher talk has shifted from cops to corona 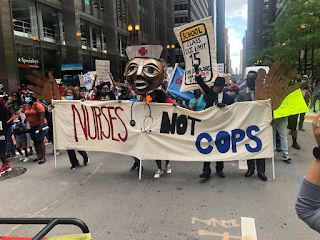 Two weeks ago, the battle was raging over cops in the schools. Who should decide whether Chicago schools get to keep or lose their SRO -- the school board or the city council? Or should it be left up to each local school council to opt-in or out, as the mayor had argued?

Should the $33M contract between CPS and the CPD be broken or renewed? And if it were broken, could that money be better spent on vital school needs like nurses, social workers, and peer mediation counselors?

Things got hot and at times personal, which is the Chicago way, it seems. As the late, great Harold Washington used to say in response to his own council wars, "Politics ain't beanbag."

While I was hoping that the school board would vote to ditch the contract, I've been more inclined to leave decisions like this one to the individual school community. Having said that, I thought the board members had a pretty good, spirited debate, with open hearings and protests taking place outside, before voting narrowly (4-3) to keep the contract and leave the decision up to the local schools.

So far, only one school, Northside College Prep, has opted out, but schools have until August 15th to make their decision.

Kenwood Academy, on the city's south side, has decided to keep their cop.

This from the Hyde Park Herald:


Interviews with local school council members, including teachers and parents, and elected student body leaders at Kenwood Academy describe a school where stationed police officers play a limited, necessary role, and all interviewees support their continued presence at the school.

The board is scheduled to revisit the issue in August when the contract runs out and the city council will also get to vote on it. By then, conditions may have radically changed.

Real life, meaning COVID-19, keeps rearing its ugly head, and the only teacher talk I'm hearing these days is not about cops in their school, but whether Chicago school buildings should even reopen in the fall. If they do open in the midst of a swelling, deadly pandemic, the SRO in the school will be the least of our worries. And if schools can't open safely, then the cop issue becomes moot, for now at least, and there will be no need for the board or the city council to renew the CPD contract in August.

The CTU polled its members and found that more than 85% of them feel they should not or might not go back to work in the fall without a detailed plan and resources that will help guarantee the safe re-opening of our schools.


“Our members have made it very clear that they are not willing to put the health—and the lives, quite frankly—of their students, or their students’ families, or their own in jeopardy under any circumstances, and especially now if the Trump administration is talking about using them as guinea pigs to help jumpstart the economy,” CTU President Jesse Sharkey said.

Gov. Pritzker and Mayor Lightfoot each seemed to be in step with Sharkey in targeting Trump's threats to withhold funding to states and districts that resist his reopen-schools mandate.

Lightfoot pushed back on Trump's demand that schools reopen regardless of the COVID threat.


“It doesn’t make any sense” for the president to make such a sweeping announcement when he doesn’t know how coronavirus is impacting individual school districts. “I don’t put much weight into what President Trump says,” the mayor told reporters.

That unified messaging may provide a good framework for reaching some badly-needed agreement in the ongoing negotiations between CPS and the unions.


Could we stop saying “reopen schools” and instead say “reopen school buildings”? Because there were a lot of us teaching and guiding student learning, coaching, giving feedback...for months after buildings closed.
— Jennifer Ansbach (@JenAnsbach) July 9, 2020