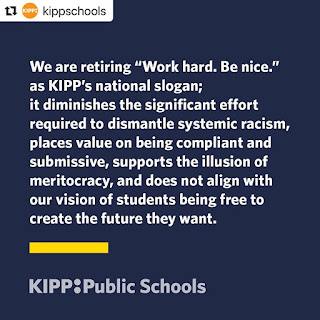 A little more than a decade ago, teacher union organizers in the midst of an organizing drive at a KIPP charter school in Brooklyn, used KIPP's slogan, "Work hard. Be Nice" against the school's anti-union leaders. They launched a national campaign urging KIPP teachers everywhere to get organized under the slogan of "Be Nice."

Now, feeling the impact of the continuing Black Lives Matter protests, as well as criticisms of sexual abuse and racism coming from within their own ranks, KIPP, one of the first "no excuses" charters, has announced they are dumping the slogan altogether. The move is in many ways, comparable to the name changes being considered under pressure, by Major League Baseball's Cleveland Indians and the NFL's Washington Red***ns. It could easily fall under the heading: Giving up a little to hold on to a lot.

But whether the superficial rebranding will mean an end to KIPP's abusive discipline practices remains to be seen. For example, they have so far failed to adequately address the allegations of sexual harassment and assault of girls of color by one of their founders, Mike Feinberg which they kept buried until the Me Too movement emerged and he was finally fired.


They don't have a replacement yet. Here is part of their statement: "We are replacing it. We are not going to rush this part. Aligned with our shared mission and vision, we know we need to lift up a slogan that better represents the tomorrow we are hoping to build, together."
— Laura Hernández (@lehernandez02) July 2, 2020


Unimaginable in this day and age, but true...The Texas Tribune reports that Feinberg's teaching credential has been restored by some administrative judges who claimed there wasn't enough evidence to justify revoking Feinberg's state certification over an allegation of sexual misconduct from more than 20 years ago.


The case, though, only examined one of the claims that KIPP said prompted Feinerg's firing. The hearing did not examine two other allegations of sexual harassment by two additional adult KIPP alumni.

“This proposal for decision does not change the circumstances of Mike Feinberg’s departure from KIPP,” said a KIPP spokesperson, referring to the recommendation.

All this leaves me wondering what crime you would have to commit in order to have your teaching license pulled in TX?
Posted by Mike Klonsky at 1:38 PM