When Trump asks, 'What have you got to lose?'

These days he's singing that same tune to coronavirus patients. Can you believe it? He's become a pitchman for an untested, unapproved drug, hydroxychloroquine to fearful victims and their families, by telling them they "have nothing to lose." Even drugs fully tested and approved by the FDA are required to warn users of any dangerous side effects.

With no proven treatment for the coronavirus, many doctors and hospitals in the United States have already been giving hydroxychloroquine to patients, reasoning that it might help and probably will not hurt because it appears to be relatively safe. But that all remains to be seen. We already know that it's not considered safe for people with abnormal heart rhythms and could lead to a stroke.

It's not that doctors shouldn't consider its use in a desperate or life-saving situation or that hydroxychloroquine is snake oil. Gov. Andrew Cuomo last month said healthcare providers in the state would be using the drug in combination with the antibiotic Zithromax, or azithromycin, for some last-ditch cases, based on potentially promising research here and in other countries.

Rather it's this obscene situation where the president of the United States, a proven liar and grifter, is serving as a medicine show pitchman for the big pharmaceutical companies like Bayer. 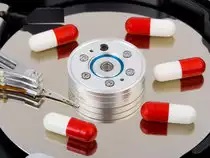 He has ordered the government to purchase millions of doses of the malaria drug and put them into an emergency stockpile even though it has not been approved for COVID-19 treatment. The artificially created demand for hydroxychloroquine as an anti-corona drug is making it more difficult for rheumatoid arthritis, malaria, and lupus patients, whose survival depends on hydroxychloroquine, to get the drug.

“They should look at the lupus thing. I don’t know what it says, but there’s a rumor out there that because it takes care of lupus very effectively as I understand it, and it’s a, you know, a drug that’s used for lupus. So there’s a study out there that says people that have lupus haven’t been catching this virus. Maybe it’s true, maybe it’s not.” -- D.T.

NIAID Director Anthony Fauci says there's no meaningful evidence to date on hydroxychloroquine and COVID-19. Any evidence so far is "anecdotal." At yesterday's press conference, Trump blocked him from speaking about the efficacy of the drug.

"Nothing to lose"? Remember, that was the same line he pedaled to black voters in 2016. He ended up with only 8% of the black vote.


This was a key moment.@JDiamond1 asked the lead scientist on the WH coronavirus task force, Dr. Fauci, to weigh in on the president repeatedly telling people to take hydroxychloroquine for coronavirus & Trump lashed out at Jeremy & said Dr. Fauci doesn't have to answer that Q. https://t.co/Q9smR8OGfn
— Yamiche Alcindor (@Yamiche) April 6, 2020