What did Bloomberg buy for $1B? Not much. 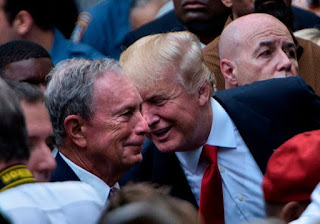 Michael Bloomberg tried to buy the election. He spent more than $1B on his failed presidential run. To put that in perspective, that's more than the combined campaign expenditures of every Democratic running in 2020.

He used his money to entice campaign workers across the country with promises of a paying job through the November election, regardless of whether he ultimately won the nomination or not. But Bloomberg reneged on that promise, scrapping plans to form his own super PAC and eventually transferring millions instead to the DNC.

His main purpose in running was to leverage his power against the left. Some even speculated that had Sanders won the primary, Bloomberg would have run as an independent or 3rd-party candidate. But now that he's dropped out and with Joe Biden as the apparent candidate, it doesn't appear that all the spending has bought him any more leverage within the party than he had before.

Evidence? Biden's team is now meeting with the AOC/Sanders team, not Bloomberg, to try and resolve their differences enough to win the Sanders base to support the Democrats. The reason? They have troops in the field and Bloomberg doesn't. And without that base, Biden has little chance of winning in November.

Whether those meetings will produce anything substantive in the way of pushing the campaign leftward is anyone's guess. Up to this point, Biden and the DNC have seemed to be worried more about the threat from it's left-wing than from Trump and the Republicans. But it's worth a try if only to save the campaign from another devastating loss a la 2016.

But for those who think that money is all you need to win, think again.

Sanders, who ended his campaign more than a month after Bloomberg's and notched more wins than the former New York City mayor, spent a total of $198.5 million on his campaign through the end of March.

Biden has not yet filed his campaign finance report covering March, but through the end of April, the former vice president spent just under $76 million on his campaign.

As for Bloomberg, the former stop-and-frisk mayor of New York, it appears that few care anymore what he thinks.
Posted by Mike Klonsky at 1:13 PM