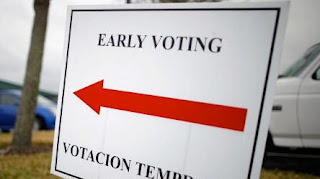 Happy birthday, Chicago. Sanctuary city of immigrants. Heartbeat of anti-Trump resistance. Definitely a union town with a black, gay, woman mayor. Look how far you've come in 183 years. See how far you have to go.

On my way to early vote this morning. The choice for me is pretty simple. Buttigieg out. Klobuchar out. Bloomberg out. Warren will likely be out before you read this post. My only choice left is between the two old white guys, Biden and Sanders.

One voted for the war in Iraq, supported the so-called "Race to the Top" in education, and authored the crime bill that paved the way for the world's worst mass incarceration.

The other, the leading progressive politician of our time. Author of a bill that requires congressional approval of acts of war. The leader in the fight for Medicare-for-all and tuition-free, K-16 public education. Opponent of school privatization. Supported by more than 100 African-American scholars, writers, and educators.


JUST IN: more than 100 Black Scholars, Writers, and Educators including @BarbaraRansby, @murchnik, @marclamonthill, Robin DG Kelley + have just announced their support of the movement to elect @BernieSanders.


All this and more will make my vote for Bernie Sanders an easy one.

My other easy vote will be for State's Attorney Kim Foxx who has turned IL from being the false-conviction capital of the U.S. into its opposite.
Posted by Mike Klonsky at 10:30 AM