Former Newark Mayor and presidential candidate, Sen. Cory Booker is acting like he just discovered that the lead-contaminated water system has been poisoning the children and families of his city for years. The latest figures from federal observers show that children in Newark's Essex County are in fact nearly four times more likely to have elevated blood lead levels than those in Flint.

Now, the U.S. Environmental Protection Agency has issued a dire warning about lead contamination, and New Jersey environmental officials found a problem with “ineffective corrosion treatment” at one of the city’s two water-treatment facilities.

In addition, according testing found that 2 out of 3 filters tested in three Newark homes failed to effectively reduce lead contamination.

In a tweet on Wednesday, Booker called on the federal government to step in.


"Everyone deserves clean, safe water," Booker wrote. "It's shameful that our national crisis of lead-contaminated water disproportionately hits poor black and brown communities like my own."

But where has Booker been up until this past week when the media started shining light on the crisis? He still hasn't taken any responsibility for the problem even though he was Newark's mayor from 2006 to 2013.

Small point...He might have used that $100M he got from Zuckerberg as a start in alleviating the problem instead pissing it away on charter schools.

As The Root reported earlier this year, in an open letter to Donald Trump, Newark Mayor Ras Baraka urged him to spend money on fixing the city’s and the nation’s old water-delivery systems, rather than a border wall.

Former Gov. Chris Christie was even worse. He actively covered up the crisis and downplayed the need for federal intervention. 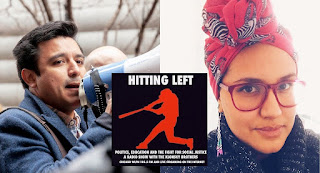 The Klonsky Bros. will be talking environmental justice and toxic racism tomorrow, 11-noon CT, on Hitting Left with Chicago socialist alderman, Byron Sigcho and Juliana Pino, policy director at the Little Village Environmental Justice Organization. Tune in to WLPN 105.5 FM in Chicago and streaming live on lumpenradio.com
Posted by Mike Klonsky at 6:51 AM