Lots of candidates but no real debate on school deseg 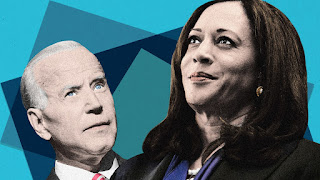 Even though I have a lot is issues with Kamala Harris, I thought she was bold in confronting frontrunner Joe Biden and calling him out during the televised debate, for his opposition to "forced" school integration back in the '70s. Actually, as he pointed out, his position hasn't changed. He is still against a federal role in enforcing the Brown Decision.

His opposition to busing and his partnership with avowed "states-rights" segregationists like Eastland and Talmadge, seemed like fair game during the debate. Thanks to Harris, Biden himself was finally forced to apologize for touting his work with the racist senators.

In fact, I was surprised that not one of the other candidates, particularly white progressives like Sanders and Warren, had Harris' back at the time. None would even dare mention Biden's name during either of the two debates. This even though the road to the nomination obviously runs through him and the DNC leadership. If you're not willing to take on Biden, what's the point of running? Unless of course, you're just a stalking horse for Biden, trying to dissipate the opposition or an unprincipled kiss-ass, hoping for a V.P. slot or cabinet appointment if Biden wins.

Such is the intimidating power of the Pelosi party leaders who are really running Biden against young insurgents like Reps Alexandria Ocasio Cortez, Ilhan Omar, Rashida Tlaib, and Ayanna Pressley, rather than any of the announced primary candidates who were on stage those nights.

Pelosi, it seems, would rather lose the election to Trump than risk losing the leadership of the party to the leftists.

Then yesterday, out comes Tulsi Gabbard (who I liked before this) with a blistering attack on Harris, calling her confrontation with Biden, "a political ploy' to get attention".

Questions for @TulsiGabbard (who I like)... A"political ploy"? Aren't you running for political office?

To get attention? Isn't that why you take part in televised political debates with the top dog?

Gabbard also claimed Harris has been "levying this accusation that Joe Biden is a racist — when he's clearly not — as a way to try to smear him."

But Harris never called Biden a racist. In fact, she pointedly prefaced her critical remarks by stating, "I do not believe you are a racist and I agree with you when you commit yourself to the importance of finding common ground."

In fact, a week later Harris revealed that she has essentially the same position as Biden on deseg being a local issue.