But isn't it a crime to threaten the life of a congresswoman? Apparently not in Louisiana. 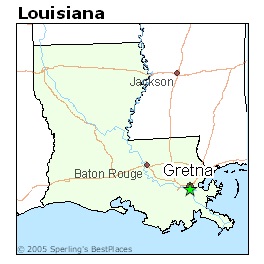 In the post, Rispoli said Ocasio-Cortez was a "vile idiot" who "needs a round."

"And I don't mean the kind she used to serve," Rispoli wrote, apparently referencing the lawmaker's past work as a bartender.

"This incident, we feel, has been an embarrassment to our department,” Lawson said of the since-deleted post.

Fired? Is that it.

I thought it was a crime to threaten a government official. So I looked it up. Yep, I was right.

But the two cops who threatened or publicly encouraged the taking of the life of Congresswoman Alexandria Ocasio-Cortez were merely fired for "embarrassing the department". What's up with that?

It looks like white racist cops, encouraged by a racist president, are above the law in Louisiana, a state with 540 lynchings to its discredit. This, especially is the case if their victims are people of color, in this case, a sitting congresswoman.

This is a continuing pattern nationwide. I'm thinking particularly of the four Chicago cops finally fired after five years, for filing false statements about Jason Van Dyke's fatal shooting of black teenager Laquan McDonald. No criminal charges were ever filed against the conspiring cops or their higher-ups, in the case.

Then there was the decision, by federal prosecutors, affirmed by Trump's hand-picked Attorney General William Barr, not to bring charges against a white N.Y. cop Daniel Pantaleo, after he choked to death Eric Garner on video in broad daylight. Garner's last words, “I can’t breathe” — became a national rallying cry against police brutality.

In stark contrast is the seemingly never-ending saga of black actor, Jussie Smollett, who was charged by Chicago cops with 16 felonies for allegedly filing a false report about a racist assault. The State's Attorney's office decided there wasn't enough of a case against Smollett to move forward. That made State's Attorney Kim Foxx, an African-American woman, the target of vengeful attacks by the racist FOP.

The case has become a rallying cry for the right-wing with even Donald Trump weighing in and calling for Smollett's head. Now a judge is looking to appoint a special prosecutor to pursue the case.

Such is our two-faced legal system carrying on the traditions of American slavery and Jim Crow.


“This incident, we feel, has been an embarrassment to our department,” Chief Arthur Lawson of the Gretna Police Department said at a news conferencehttps://t.co/rdJ1dUvh99
— The New York Times (@nytimes) July 23, 2019