'Flooding the zone' with cops didn't work. It never does.

It's hard to blame Mayor Lori Lightfoot for this Memorial Day weekend's rash of gun violence and deaths. After all, she's only been in office for a week. But I can say that her strategy of pre-weekend preventive mass arrests and then of "flooding the zone", concentrating 1,200 extra cops in targeted neighborhoods in the black community, was a bust -- as it always is.

The body count from Friday afternoon to Monday is reported to be at least 42 people shot, five fatally. This, even with severe storms keeping people indoors yesterday.

Several of the victims were shot within five hours on Sunday at the ABLA housing project on the northwest side. The second shootings occurred on the same block as the first while cops were still present and resulted in five more people being shot and two of them dying.

The Tribune's account presents a scene right out of a dystopian movie:


On Monday night, felony charges were announced against two men in the second shooting. Tevin Covens, 25, was charged with aggravated discharge of a firearm and Lawrence Wilkins, 29, was charged with unlawful use of a weapon by a felon after police found him carrying a gun at the scene, authorities said.

Chicago police spokesman Anthony Guglielmi said Covens will not be charged with murder after he shot and killed one of the two men at the scene in self-defense.

According to police, Covens was shot in the face at the scene by 28-year-old Antonio Green, who also shot and killed another man, 27-year-old Martez Cox, after Cox fired a TEC-9 machine pistol into the air.

Covens, also armed, opened fire on Green, killing him in self-defense, Guglielmi said. But he said Covens also unintentionally fired shots that wounded two female victims at the scene. Guglielmi said Covens was only charged with aggravated discharge of a firearm and not aggravated battery with a firearm, which is a more serious crime, because the female victims did not want to press charges.

There were slightly more shootings this year than last, despite yesterday's storms and police saturation. But the toll was somewhat lower than in 2017 when 45 people were shot, seven of them killed, or in 2016, when 71 people were shot, six of them fatally. But I doubt that people in the community or the mayor are taking much comfort in that this morning as funeral preparations are being made. 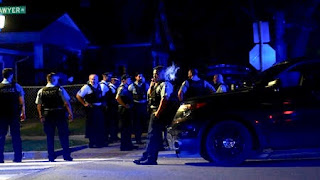 There are viable, tested, long-term strategies for reducing gun violence, strategies that have been successful in other big cities like New York, Boston and L.A.. They begin with gun control and stopping the sale, manufacturing and easy flow of guns into the neighborhoods. If the image of a young man getting shot to death in "self-defense" while firing an assault weapon into the air, doesn't move us to action...

A recent Sun-Times article by Kim Foxx and Arne Duncan (Chicago must learn from L.A. and New York that murder is more than a policing problem) gets it mainly right.


Both New York and Los Angeles have coordinated, holistic, and publicly-funded plans to dramatically reduce gun violence centered on prevention, intervention, and community coordination and support. As a result, New York reached a new low of 287 murders in 2018 and Los Angeles has experienced a 30 percent reduction in homicides since instituting a comprehensive community-based strategy in 2007.

Historically, the response in Chicago to a violent night or weekend is to put more police officers on the streets. The presumption is to deter through police deployment, but the focus should be on prevention — and that happens before criminals become criminals. We all recognize policing has its place among the tools to reduce violence, but we also know increased police presence is not the solution.

A lot more could be added about community engagement, ending poverty with jobs jobs that pay a living wage, community re-investment and and end to mass school closings (pointing at you, Arne Duncan) and neighborhood clinics. Lightfoot understands the need for long term, wholistic strategies but can she put them into action? Certainly not by herself.

But one thing is certain and needs to be reconsidered by the mayor. "Flooding the zone" with cops and filling the prisons with young people of color, are proven failed strategies.
Posted by Mike Klonsky at 7:41 AM