Electing Lightfoot was just the start. Real reform comes from below.

Yesterday's inauguration ceremony made my heart sing. Mayor Lori Lightfoot's Inaugural Address was over the top. It was at once a resounding call for change and a personal commitment on her part to carry it through. She also put the dregs of the old machine on blast, turning to the council members, newly elected and old, and promising that the old ways of doing business were a thing of the past.

This from IL Playbook:


And with that, she turned to look directly at the council members — including Ald. Ed Burke, who is facing federal charges of corruption. The crowd erupted with extended cheers and applause. Lightfoot said “the worst abuses” were a result of aldermanic privilege. Let's just say the Aldermen were slow to stand with the crowd. As her first official act as mayor, Lightfoot fulfilled her campaign promise to sign an executive order reeling in certain aldermanic powers.

But let's not fool ourselves. No executive order from the mayor is going to put an end to the culture of corruption with the Chicago City Council. There is still what's left of the old Cook County Democratic Party machinery. There's too much money and power at stake for them to fold up tent and go away just because we elect a Harold Washington, a Barack Obama, or a Lori Lightfoot. You can bet that on this very day, the Bs (Burke, Beale, and Berrios) and others are gathering in their favorite watering holes, planning their resistance and resurrection. They will lay low for a while until their opportunity presents itself.

Then there's the possibility of divisions and splits with the ranks of the progressives themselves. 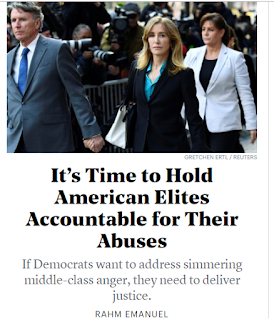 The old guard still controls official party money and machinery as we head into the 2020 presidential campaign. Machine quarterback Rahm Emanuel has already feathered his nest at The Atlantic where he hopes to be a driver and fundraiser for the Biden Campaign. The irony of Mayor 1%'s first Atlantic column, calling on Dems to "become a party of justice and hold elites accountable" will not be lost on Chicagoans.

The old guard's problem is that times have changed since the days of Council Wars when the racist Vrdolyak/Burke cabal held the city hostage after Harold, our first black mayor was elected.


Ald. Scott Waguespack (32nd ), who Lightfoot wants as Finance chairman, says any aldermen "pushing back hard" now will be more "congenial once we get to work." With so many indictments or charges hanging over the council in recent years, there's little room for aldermen to fight back against changes to the ethics rules. Once new standards are set "and we begin to work with her, it will be a good legislative body working with a good executive to move forward on her mandate."

Let's hope my alderman is right. Either way, real reform, as always, comes from below. It's up to us to be organized and standing reading to protect the Lightfoot reforms, once they are in place. Having the 5th floor of City Hall and growing power in the city council helps. But unless the communities and organizations that elected Lightfoot and the new council progressives remain strong and active a machine comeback is possible.

FROM ABOVE, FROM BELOW...Walking out onto downtown streets after the inaugural celebration, folks got a real taste of what "from below" means. Only minutes after the new mayor had exhorted the audience to, "stand with women all across our country who fear for their basic rights and feel powerless..." many joined with marchers who had taken to the streets to protest the outrageous anti-women laws passed in Alabama, Georgia, Louisiana and other Republican states.