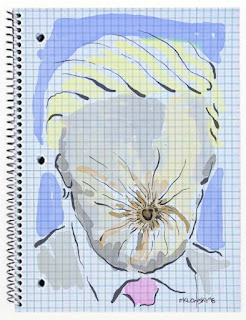 I watched Trump’s wall speech last night. Well, it wasn’t really a wall speech since DT hardly made mention of the wall itself. In fact you couldn’t really call it a speech since he simply sat expressionless in front of a camera, reading from a teleprompter, someone else’s (Bolton’s? Kushner’s) words.

There was no energy in the room, not the kind that he’s used to at arena gatherings with his deplorables cheering every mention of the wall, crooked Hillary, or MAGA. I don’t know which of his peeps thought this was a good idea. Trump had nothing to say, nothing new to add to justify his shutdown of the government.

He had no idea who his audience was, but there he sat, trying to look "presidential".

I thought sure D.T. was going to declare a "national emergency" and demand money for the wall that way. Then he could have saved face in front of the deplorables, opened the government and walked away looking like a man who means what he said.

Of course, such declarations, including the most recent where he claimed he was going to immediately pull our troops out of Syria, only to put the withdrawal into reverse a day later, mean nothing to this serial liar.

When he did mention the wall directly, his points were almost silly. Like when he claimed he was conceding to Democrat's demands that the wall be made of steel rather concrete. Have you heard anyone making that steel argument? Me neither.

Good tip here for the lovelorn. Instead of spending all that money on a ring, show your loved one you care by putting a wall around them.

He also turned himself into a pretzel trying to explain once again how Mexico was going to pay for the wall, "indirectly by the great new trade deal we have made with Mexico."

Problem solved. Just put the $5.7B into the budget as "indirect income" from Mexico and when it comes in, pay for the wall. Why the need to hit up the taxpayers if the new great NAFTA deal will pay for it? Oh, I forgot. There isn't yet a new NAFTA deal, great or otherwise.

OK, I'll stop now. I feel like I'm having to go through this thing twice.

But I just want to add, as deadly as Trump's fireside talk was, things weren't much better on the Democrat's side as Pelosi and Schumer , resembling American Gothic, gave a weak rebuttal, actually uniting with Trump on the need to spend billions more on "border security",  just don't call it a wall.

Best alternative to both Trump and the Dem Party stiffs was Rep Alexandria Ocasio-Cortez.

The congresswoman then called upon the president to recognize “that he has systematically engaged in the violation of ... human rights on our border,” including the separation of migrant families.

She also recalled the death of an immigrant child in Border Patrol custody minutes before Christmas Day and questioned how Trump could continue asking for support for U.S. Immigration and Customs Enforcement.

Ocasio Cortez along with the other new young, mainly women of color, elected in the midterms, now represents the future of the Democratic Party.
Posted by Mike Klonsky at 12:51 PM