Rahm's Wintrust Arena is a monument to neighborhood disinvestment 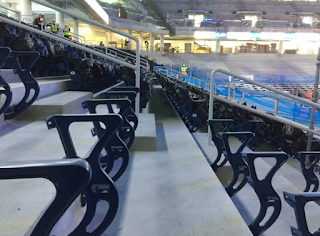 As we learn more and more about how Mayor Rahm Emanuel and his corrupt cronies in the City Council, like Ed Burke and Danny Solis traded development projects for personal and political gain, it's worth taking a look back on one of Rahm's early superprojects.

The plan for a new DePaul basketball stadium, now called Wintrust Arena, was announced about a week before City Hall closed 49 public schools and nearly all the city's mental health clinics in 2013, was met with heavy protests when it was it was proposed. Protests grew louder after the mayor approved $55 million in tax-increment financing (TIF) funds to pay for it. Ultimately, it was financed through $82.5 million in tax dollars levied by the Metropolitan Pier and Exposition Authority, the quasi-governmental agency that oversees McCormick Place and Navy Pier. It also received $82.5 million from DePaul University, which will use the arena for 23 men’s and women’s home basketball games. It's still not clear what the final cost (not counting operating costs) actually was. But it's probably up around $250 million.

To community residents, the new arena was a slap in the face, continuing the pattern of moving public investment towards downtown and lakefront private development and away from the neighborhoods, from schools and city services.

Not only that, but as many of us predicted it would, the shiny new arena now sits mostly empty during games and events. The supposed anchor team, DePaul men's basketball Blue Demons, which for the past decade or more has refrained from recruiting inner-city Chicago high school players, is not a draw. I went to a WNBA game there and you could sit anywhere you wanted. So many empty seats.

Arena operators claim the building broke even on its expenses during its first year of operation and will turn a profit of roughly $350,000 per year in its second and third years of operation, respectively. But if you go to a ball game at Wintrust you can't help but wonder.


As the Blue Demons settle into their second season at DePaul’s new 10,000-seat Wintrust arena, men’s basketball fans showed little interest in attending the Blue Demons’ 2018-19 non-conference slate, according to documents obtained by The DePaulia via Freedom of Information Act.

Through DePaul’s final and most well-attended non-conference game of the season — a crushing last-minute loss to Boston College — Wintrust saw an average of 1,274 fans scan their tickets for each game. Out of the Blue Demons’ nine home games over that time, five saw fewer than 1,000 spectators.

If there was ever a private university that didn't need a taxpayer (TIF) funded arena, it is DePaul, the largest private, Catholic university in the nation. Wintrust Arena now sits as a near-empty monument to the Rahm Emanuel, pay-to-play era in Chicago politics.