Solis to Burke: 'Get out now, while you still can'. 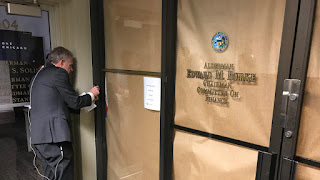 In Chicago, it's often a hare's breath for machine politicians between re-election and prison.

During an appearance on "Chicago Tonight", retiring Ald. Danny Solis (25th) sent a message to Ald. Eddie Burke (14th) encouraging the last of the racist, old-guard cabal that fought Harold Washington, Chicago's first black mayor, to join him in retirement.


“I think he should reconsider” his bid for re-election, Solis told reporter Carol Marin. “You got money, you’ve got a great family, you’ve got grandkids, why do you want to run?”

Burke does have money, lots of it. He's made a fortune parlaying his powerful position as head of the city council's finance committee with an enterprising real estate tax avoidance business that has helped the rich and powerful legally cheat the city out of taxes. His biggest client of course, is Donald Trump himself. As for family, his wife is none other than Illinois Supreme Court Justice Anne Burke.

No sooner had Solis' message been sent, than the FBI was at Burke's office door, clearing out his staff, and papering over his windows while they searched the place for evidence. Evidence about what? Maybe it's tied to the Mueller investigation. Who knows?

By 1:30 p.m., federal agents had left Burke’s ward office with boxes, at least three monitors and what appeared to be a computer. (Tribune)

The point is that maybe after 50 years as a machine kingpin, the law may finally be catching up to Burke as it did with his old co-leader of the anti-Harold cabal, "Fast Eddie" Vrdolyak who did time for tax evasion and is now, once again under federal indictment.

On Thursday, Garcia issued a statement slamming Burke for representing an “impediment to political progress and community empowerment.”

Seeing the writing on the wall, Solis has thrown in with Chuy's new Latino political action committee. Burke's days are definitely numbered.

I have a feeling that somewhere, Harold is laughing and resting a little easier today.