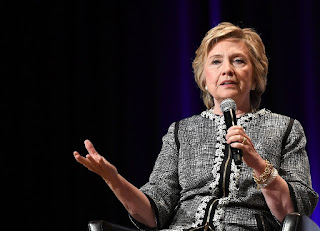 "I voted numerous times when I was a senator to spend money to build a barrier to try to prevent illegal immigrants from coming in." --  Hillary Clinton.


Last week on Hitting Left, brother Fred asked me and our guests for our takes on the so-called Democratic "blue wave". I responded that while the midterms represented a big victory for the Democrats, I wouldn't call it a blue wave, but rather an anti-Trump wave.

The wave came primarily from youth, women and people of color, many running or voting for the first time. The Democratic Party leadership had no single unifying or inspiring message or program besides anti-Trump, around which to mobilize voters. Apparently, that was enough in many races and could be again in 2020.

This election sweep was mainly a mass response to Trumpism and the threat his regime represents to democracy, world peace, economic stability and human rights.

Will that wave continue and grow through 2020 and beyond? Most likely, it will. But never underestimate the ability of the Democratic Party leadership to snatch defeat from the jaws of victory like they did in 2000, 2004 and 2016.

On Thursday, Hillary Clinton, emerged from the woods to dip her toes once more into presidential campaign waters.

In an interview with The Guardian, she urged European leaders to "get tough" on immigration, a la Donald Trump, by sending a message that they will no longer offer “refuge and support” to refugees.

She blamed immigrants fleeing war, violence and oppression in their home countries for "opening the door to political turmoil" and for the rise of the European neo-fascist, anti-immigrant movement. Not to mention, Britain's decision to withdraw from the European Union. A clear case of blaming the victim and putting the cart before the horse.

HC's anti-immigrant warning was first pitched before the United States midterm elections this month. Maybe she was caught short by the overwhelming defeat served up to Trump and his caravan scare tactics. Her appeasement rhetoric however, played right in the hands of Republicans who took a licking in the elections, but who can now quote her when making their anti-immigration pitch and demanding $52B for Trump's wall.

Before Hillary Clinton says another word about shutting the door on refugees in Europe or anywhere else, she and the Democratic leadership should look back on their roles in driving the global refugee crisis, from  support for the invasion of Iraq to the destabilization of Libya and Syria to her backing for the military coup in Honduras.

Aviva Chomsky writes in The Nation:


It was, after all, President Clinton who oversaw the draconian Illegal Immigration Reform and Immigrant Responsibility Act of 1996. It drastically increased all levels of immigration “enforcement,” enlarging the Border Patrol, criminalizing numerous types of low-level immigration violations, and facilitating and expanding deportation procedures. (A similar emphasis on casting blame on individuals for structural and systemic problems was also at the heart of Clinton’s welfare reform of that same year.)

In many ways, Donald Trump is only reiterating, with more bombast, ideas and policies pioneered under Clinton, that then became a basic part of Barack Obama’s approach to immigration. Those policies drew directly on racist “tough on crime” and anti-terrorism police tactics that also helped foment white racial fears.

Putting the lack of morality of it aside for a moment, Democrats can't win in 2020 by appeasing Trump and by running point for his anti-immigrant platform. A clean break from Clintonism would be a good start down the road to a real blue wave.
Posted by Mike Klonsky at 3:09 PM