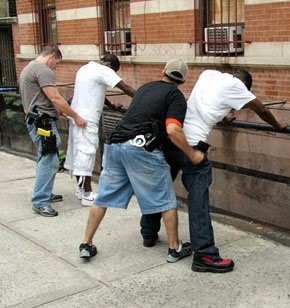 DT has this thing for Chicago. Maybe it's because we ran his ass out of town during the 2016 campaign and he's never been back since. His latest fascist rant is not original. It calls for increased stop-and-frisks on the city's south and west sides as a response to Chicago's gun violence epidemic. Doesn't he know CPD has already been there, done that? And is still doing it.


“The crime spree is a terrible blight on that city,” he said Monday at an International Association of Chiefs of Police convention in Orlando, Florida.


“I know the law enforcement people in Chicago, and I know how good they are. They could solve the problem if they were simply allowed to do their job and do their job properly."

That someone should remine DT that while there is a gun-violence problem, there is no "crime spree" in Chicago. In fact, as my friend Marilyn Katz posts on FB this morning:


Chicago is safer now than it was 40 years ago if measured by robberies and homicides. Not great but in the face of sessions and Trump important to remember.

Marilyn was responding to another one of DT's may rants which blamed immigrants for the supposed rising crime rates. She cites a Marshall Project study that found,


...while the number of immigrants — including those living here illegally — overall in Chicago rose by 73 percent from 1980 to 2016, the city’s violent crime rate fell by 14 percent. The report found that assaults were up 8 percent, but robberies fell by 32 percent and homicides by 18 percent during the time period studied."

Watching his ratings tumble, Gov. Rauner has joined in on Trump's attack on immigrants and blaming them for Chicago's crime rate. He told the Sun-Times editorial board yesterday:


"One of the reasons we have such high unemployment in the city of Chicago and so much crime is the massive number of illegal immigrants here that take jobs away from American citizens and Chicago citizens."

The mayor says he's against Trump's version of stop-and-frisk.


“Even someone as clueless as Donald Trump has to know stop and frisk is simply not the solution to crime,” spokesman Matt McGrath said.

But it was Rahm Emanuel who pushed the largest stop-and-frisk plan in the nation, well after stop-and-frisk had been ruled unconstitutional in N.Y. Rahm has even asked Trump to send in federal reinforcements — in the form of more ATF, DEA and FBI agents — to “take down gang leadership” and stop the “drug trade.”

I take that as an admission that his policy of loading up the city with thousands more cops, is a failure, especially white the flow of guns pours across the Indiana line.

By the summer of 2014, Chicago cops had performed a quarter million stop-and-frisks in just 90 days, without making any arrests. Over 80% of those stops involved black or Hispanic suspects,   Shootings in the city (including those by police) continued to rise at a record pace before the policy was changed.

Stop-and-frisk was proven to be a failed, racist policy.
Posted by Mike Klonsky at 11:07 AM