Why do so many rapes go unreported? The backlash of white male power. 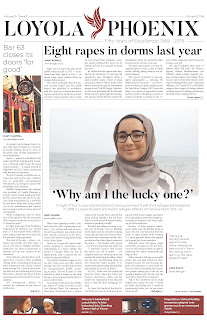 Standing on the White House lawn, President Trump was talking about the Kavanaugh confirmation fight when he said, quote, "it's a very scary time for young men in America."

On my way to my Urban School Policy class at Loyola yesterday, I picked up a copy of the campus newspaper and was shaken by the headline. EIGHT RAPES IN DORMS LAST YEAR.

Sixteen of the 18 students in my class are women. Several live in the dorms. Most were surprised that I was shocked by the story. There were probably more than eight, they told me. Many go unreported. Then there are the daily cases of abuse which aren't counted as rape.

I'm not naive, but still visibly shaken as I move ahead with my teaching. I'm processing all this as the Senate prepares to approve Trump's lifetime appointment of  accused sexual assaulter Brett Kavanaugh to to the highest court in the land.

The appointment, I assume is a done deal and has been from the beginning. The hearings and this week's FBI investigation have been a sham, an possibly even a worse case of abuse than Kavanaugh's original offenses against Dr. Ford and others.

The story is no longer just about the Kavanaugh appointment. It's turned into a well-organized revanchist backlash by an angry and desperate conservative, white, male power structure, lashing out against the women accusers and #MeToo and fighting for it's very survival as the midterm elections approach.

Why are so many of the dorm rapes and assaults going unreported? Anyone who watched the hearings or or who heard Trump warning the nation about the trauma faced by the next generation of boys whose lives will likely be ruined by unfounded rape charges, will understand.

I'll be talking about Kavanaugh and more with my daughter and ace political strategist, Joanna Klonsky, today on Hitting Left.

Time for a change.