Back from Parkland. A new student movement is born. 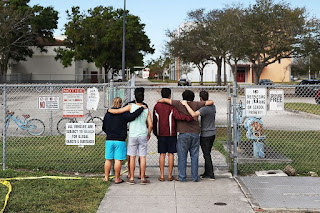 I'm back from Parkland where I got a chance to talk with some Marjory Stoneman Douglas students, parents and educators in the aftermath of another catastrophic mass school shooting.

Like most of the country, I shared grief with the mourners and cheered on the dozens of MSD students who boarded the buses to Tallahassee to offer their reasonable gun control proposals to the state legislature only to be ignored and insulted by state pols.

Florida happens to be the state most averse to gun control legislation with a majority of state legislators receiving big campaign donations from the NRA. In FL, for example, if municipal officials pass a firearms-related law, they must pay a $5,000 fine and lose their jobs. They can also be forced to pay up to $100,000 in damages to any “person or an organization whose membership is adversely affected by any ordinance” —such as, say, the NRA.

To show how deep the divide is, the old, white male Republicans who rule the state, after refusing to meet with Parkland students to consider a ban on assault rifles, passed a resolution declaring that pornography endangers teenage health.

Refusing to be demoralized or turned around, not even by death threats from the right, the students are turning their grief and anger into militancy, organizing an NRA boycott, two national student walkouts against gun violence and lobbying for a ban on assault weapons. The shootings have sparked a new national movement with students taking the lead.

Students have traditionally been the igniters of larger and broader progressive social movements. That was true of the Civil Rights Movement (SNCC) anti-war and anti-imperialist youth revolt (SDS) of the '60s and the student uprisings here and in Europe 50 years ago.

The power of the youth movement rests in its embodiment of a vision that transcends the immediate demands and aims at reshaping the world in which the next generation will live, work, and lead.

But the emerging militant student movement alone, even with liberal supporters cheering them on and donating money, is incapable of carrying this struggle through to the end. But as it was in Paris, Berkeley, and Columbia University in '68, there is a basis for united action between students, communities of color (who are feeling the brunt of gun violence), and organized labor, now fighting the Janus decision for its very existence.

The current student protests may never approach the scope or depth of the '60s protest movement. It's impossible to predict. But hopefully, a unifying strategy will emerge from this new vital movement so that the students won't have to go it alone.
Posted by Mike Klonsky at 1:38 PM