Another look at school size and the Parkland shooting

Broward County, FL -- School's back in session here today and it will be interesting to see if the student protests continue to gain strength and capture prime media space. National anti-gun school walkouts are being planned for March 14 and again on April 20th, the anniversary of the Columbine shooting.

One thing I've learned is that my original comparison of Marjory Stoneman Douglas with Columbine doesn't hold up across the board. It's true that both were large schools -- Columbine had about 2,000 students while Douglas has more than 3,000 -- and that large school size correlates with increased incidents of violence and often breeds the kind of anonymity that prevents intervention before a Parkland-type event can take place.

A closer look makes me think that school size wasn't the big problem at MSD. While the FBI may have botched handling the tips they received about shooter Nikolas Cruz, the school's teachers and administrators didn't. Despite the size of their school, they were in touch with students well enough to anticipate Cruz as a potential violent actor and intervened in his case as best they could. Interventions took place going back to his middle-school days. Cruz faced a long string of escalating disciplinary measures throughout his academic career for insubordination, profanity, disruption, fighting and assault. Those attempts ended with Cruz's expulsion from high.


The real problems started at least as early as middle school and quickly intensified. There were the vocal outbursts, disturbing drawings of stick figures with guns, constant disciplinary issues. There were threatening statements written on his homework and scrap paper, including a reference to killing President Barack Obama, saying he should be “burned alive and eaten.”

His middle school and high school teachers referred him to individual and family counseling, the records show. They held parent conferences and called social workers. They sent him to in-school suspension, and they sent him off campus. For a time, they sent him to a school for emotionally disturbed youth. Finally, after he was disciplined for an assault at Marjory Stoneman Douglas High, they asked for an assessment of the threat he posed to his school, and ultimately he was expelled, about a year before he returned with a gun.

Up until the time of the attack, teachers were actively engaged with Cruz and acted professionally. During the attack, many acted heroically and were instrumental in saving student lives. This included football coach Aaron Feis who gave up his own life while shielding students from the gunfire.

Even if the FBI had properly followed up on tips they received about Cruz, it's unclear what actions might have been taken. The point here is that nothing the 19-year-old Cruz did up until the time of the shooting, including his purchasing of an assault rifle at local gun store, was illegal. Keeping an automatic weapon out of his hands would have been the only way to prevent the massacre in Parkland.

Pres. Trump's attempt to blame the FBI and even the student victims themselves is indicative of his own sociopathy. It was Trump who one year ago, after accepting more than $30 million from the NRA, signed an order loosening gun sale restrictions.

In a vapid response to the mounting student protests both parties are offering up meaningless bills which, even if passed (doubtful) will do nothing to prevent more massacres of this type, let alone the daily deaths from gun violence in cities like Chicago. The GOP bill simply tweaks existing state rules on gun registration. 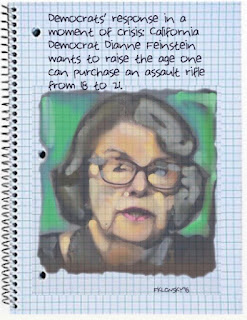 Sen. Diane Feinstein and the Dems want to raise the legal age for buying AR-15s from 18 to 21. Democrats once again seem willing to snuggle up close, but slightly to the left of Trump and the GOP.  Nothing they could do could breed more cynicism among the protesting students and potential young voters. It seems the Dems have once again come up with a recipe for snatching defeat from the jaws of victory in 2018.